TERRELL'S TUNE-UP: What I Did on My Summer Vacation

A version of this was published in The Santa Fe New Mexican
September 13, 2019 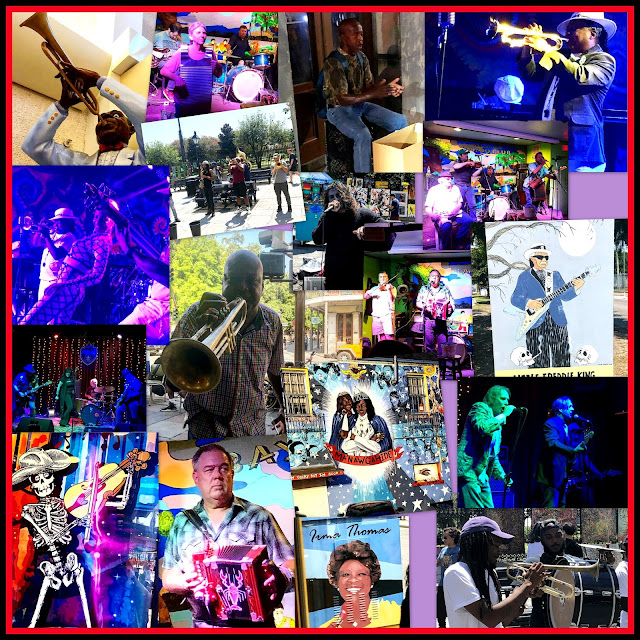 It was a leisurely Thursday morning in the French Quarter of New Orleans. I’d just finished my breakfast, a crawfish omelet, and had planted myself on a park bench in Jackson Square to catch up on some reading. I was enjoying the sidewalk jazz set up by Café Du Monde across Decatur Street from the park. The band was right in the middle of “(Won’t You Come Home) Bill Bailey” when all of a sudden they were drowned out by a loud, almost surreal calliope playing Scott Joplin’s “The Entertainer.” 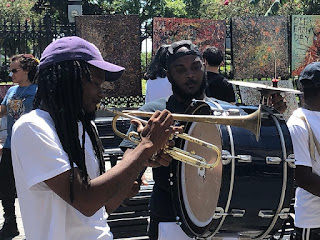 This was the second day in a row that I heard mysterious calliope music filling the air on Decatur. I’d heard it the day before, some spooky-sounding tune I didn’t recognize, in the late afternoon upon leaving my hotel. I couldn’t figure out where it was coming from.

A local friend, who lives right across the Mississippi River at Algiers Point, later explained to me that it was coming from one of the riverboats parked nearby.

Depending on the calliope player, she said, it can actually sound great.

But that morning on Jackson Square, I just found it annoying as it interrupted a band I’d been digging on. So I decided to cross the park and walk around some. There, on the street facing St. Louis Cathedral, was another brass band, this one made up of younger guys, and they were even better than the group over by Café Du Monde. And by this time the calliope had subsided.

I wanted to give them a tip but had no small bills, so I went one street over to find a place to break a 20. And, lo and behold, there was yet another sidewalk band — this one with a guy playing a jazzy electric guitar along with the horn blowers and drummer — and they were nearly as good as the kids over by the cathedral.

Just another Thursday morning in August in New Orleans.

Man, I love this town! Great food, voodoo — and music is everywhere. Even the airport is named after Louis Armstrong. Music seems to permeate the streets.

Hoofing it from the French Quarter to Treme, for instance, traffic islands have little shrines featuring brightly colored murals of local music heroes. The walls on some businesses and even some houses feature musical murals.

Part of the building features current owner and jazzman Kermit Ruffins playing his trumpet as well as beloved local weirdo rock group Quintron & Miss Pussycat. That’s right next to a larger mural featuring former owner, the late R&B star Ernie K-Doe, hyphen and all (his big hit was “Mother-in-Law” back in 1961) and his wife Antoinette in full royal-highness regalia.

The first night I was in town, I found a little bar on Bourbon Street called Tropical Isle’s Bayou Club, where an accordion-and-fiddle-driven group called The Cajun Drifters was playing. Led by singer Bruce Daigrepont, who plays a red accordion with a painted-on crawfish, they’ve got a good stompin’ sound that doesn’t drift far from traditional Cajun music.

I liked the Cajun Drifters so much I decided to go back to the Bayou Club my last night in town. Alas, they weren’t playing there the second time around, but another band, T’Canaille, was there. 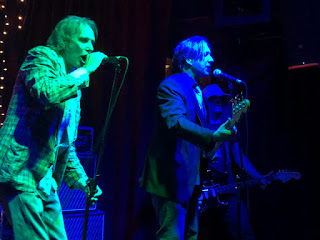 Weeks after booking this trip, I was excited to learn that my Texas friends and cow-punk pioneers the Hickoids were playing NOLA while I was there. (Guitarist Tom Trusnovic is a Santa Fe boy.) They were at d.b.a., a club on Frenchmen Street, a district full of music clubs.

I’ve seen their show — always rocking, always hilarious, always filthy — a dozen times or more. But
this show was special. Only days before their New Orleans gig, while the band was touring Spain, head Jeff Smith, learned that his older brother Barry had died. Barry’s memorial service was the day before the gig.

So Jeff was the essence of “the show must go on.” It wasn’t easy, but he pulled it off with raunchy grace. (Here’s a little plug: The Hix just released a live album, All the World’s a Dressing Room on Saustex Media that’s a fine representation of their live show.) 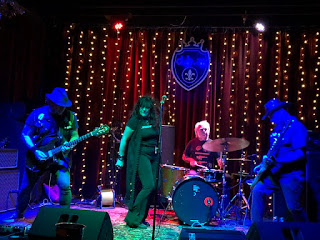 Though the Hickoids isn’t a New Orleans band, their opening act, DiNOLA is. Fronted by singer Sue Ford (her husband Jimmy Ford is the drummer) DiNOLA has a hard-edged, sludgy sound has a pre-metal ’70s feel.

I was back on Frenchmen Street the next night to see Kevin Ruffins & The Barbecue Swingers at a club called Blue Nile.

Kermit invoked Armstrong on his snazzy version of “On the Sunny Side of the Street,” then did a fantastic version of the ever-goose-bump-inducing “St. James Infirmary” (his arrangement had more Cab Calloway than Satch) and made the classic “Jock-A-Mo (Iko Iko)” his own. 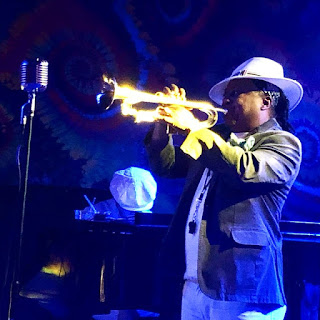 As the show progressed, Kermit shared the stage with some of his friends, the most memorable being Judy Hill, daughter of Jessie Hill, best known for his 1960 R&B hit “Ooh Poo Pah Doo.” (Unfortunately, Judy didn’t play that song that night.)


I didn’t learn this until later, but Kermit, now in his 50s, started out his career playing for tips with friends in Jackson Square.

That means that one of the young players I saw there could grow up to become the next Kermit Ruffins.

Now for some videos:

Here's the Cajun Drifters at the same place I saw them.

Ladies and gentlemen, the fabulous Hickoids

I'm glad DiNOLA didn't die when I was in New Orleans

And here's the mighty Kermit 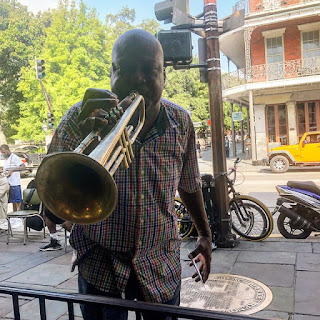