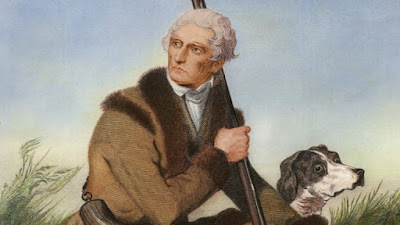 No, he didn't die blazing a trail through unexplored territory or killed in battle by Indians pissed off about him blazing trails through their land or mauled to death by a mother raccoon who though his hat was her baby.

He died at his son's home in in Missouri at the age of 85.

Here's some basic info from History.com

Daniel Boone was a hunter, fur trapper and trailblazing American frontiersman whose name is synonymous with the exploration and settlement of Kentucky. Crossing the Appalachian Mountains and traveling through the Cumberland Gap, Boone helped carve the Wilderness Road from Virginia to Kentucky and established the Boonesboro settlement. He fought in the French and Indian War and escaped the wrath of Native Americans many times over.

And I like this little tidbit: "At the age of 78, Boone volunteered for the War of 1812 but was denied admission into the armed forces."

The whole "living legend" concept has been overdone and cheapened during the past few decades, but if anyone actually qualified for title, Daniel Boone was it. This was largely due to a writer named John Filson, who mythologized his days as a frontiersman.

And yes, there have been songs about him.

Here's one I bet every kid who grew up in the (19)60s will recognize, the theme song of the television show about him that starred America's favorite coonskin hat model Fess Parker, (who in the previous decade starred in and sang the theme song for the Davy Crockett tv show.

Singer Ken Carson released this strange ditty on 78 in 1955


And also in the mid '50s, country singer George Hamilton IV did this nifty tribute