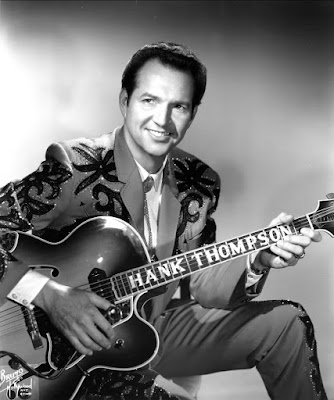 On this day in 2007, the greatest country music Hank not named Williams died. Hank Thompson -- whose hits included "The Wild Side of Life," "A Six Pack to Go" and "Oklahoma Hills" -- was 82 when he went to that great honky tonk in the sky..

This sad anniversary falls on Wacky Wednesday this year, so let's celebrate Hank by featuring some of his funniest tunes. In addition to all his other talents, the man knew his way around a novelty song.

A personal note here, if you indulge me in a little name-dropping: I met Hank in the early '80s and even more bitchen, I was introduced to him before his show at the old Line Camp in Pojoaque by none other than Roger Miller. Roger told Hank, "Steve's from Oklahoma City, he said, truthfully. But then he added, "I think he was raised on Reno Street," referring to an old OKC skid row. All three of us laughed out loud.

Anywho, have some laffs and remember Hank.

This one could never be played on the radio today -- perhaps with good reason -- but in 1958 it was a number 2 country hit. Hank was still singing it in 1991.

Finally here's one of his last recordings, a duet with my old Santa Fe High School lockermate, Junior Brown in 1997.