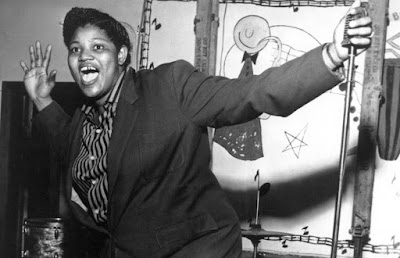 Born in Ariton, Alabama she started her musical path singing in church, though she was drawn to the blues of Bessie Smith and Memphis Minnie. Thornton was a hard-living, hard-drinking R&B singer whose heyday was in the 1950s, when she was part of Johnny Otis' Revue.

Though she deserved fame on her own talents, Thornton is best known for two songs done later by other singers.

She recorded the first version of "Hound Dog," written by Jerry Leiber and Mike Stoller in 1952. A guy named Presley had a huge hit with a seriously mutated version of that song three years later.

She also wrote an odd, dark blues called "Ball and Chain" in the early '60s, though it wasn't released until after Janis Joplin, fronting Big Brother & The Holding Company, recorded it and made it famous in 1968. (And in an archetypal story of music industry greed and cruelty, her record company owned the copyright, so Thornton didn't receive any royalties from Janis' cover.

Have I told you lately how much I hate the music industry?

Big Mama outlived both Elvis and Janis, but by the time the '80s came around, the booze had destroyed her liver and her heart. Despite her trademark girth for so many years, when she died, she reportedly weighed less than 100 pounds.

But today, we celebrate her life and music. Let's start with her best known song:

Here's "Ball and Chain" before Big Brother put it through the psychedelic grinder:

In 1980, Aretha Franklin had Big Mama as a guest on her TV special. Thornton would have been in her early 50s at the time she and Aretha sang this Bessie Smith classic.