THROWBACK THURSDAY: All I Did Was Shoot My Wife 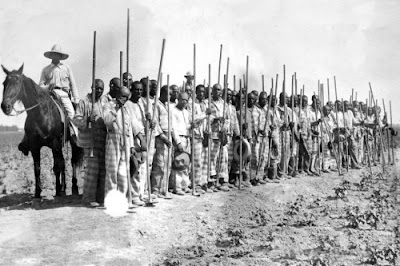 Here's a song written by a guy named after Booker T. Washington who ended up in a Mississippi prison for assault.  He'd shot some guy in the leg.

Booker T. Washington White, known professionally as Bukka White, already was a recording artist before his  two-and-a-half-year prison stint in Mississippi's infamous Parchman Farm. He'd recorded 14 blues and gospel songs in Memphis in 1930 under the name Washington White (though Victor Records only released a handful of those tunes at the time.)

He wasn't asked to record again until 1937. At that point he was awaiting his trial for the shooting. But a gig's a gig, and White skipped bail and fled to Chicago for his record deal. He managed to record a few tunes before the law caught up with him.

White, according to Allmusic Guide, "proved a model prisoner, popular with inmates and prison guards alike and earning the nickname `Barrelhouse.' It was as `Washington Barrelhouse White' that White recorded two numbers for John and Alan Lomax at Parchman Farm in 1939.

But "Parchman Farm Blues," his song about the prison, didn't come until 1940, after he'd been released.

Reflecting on his incarceration, White sang,

White sang it, accompanying himself on guitar, aided by Washboard Sam on percussion.

Hear it for yourself:

You probably notice that White's song doesn't sound much like any version of "Parchman Farm" that came later. The song broke out of its genre prison leading authorities on a multi-decade chase that's probably nowhere close to finished.

Nearly 20 years after White recorded this song, a Mississippi hipster named Mose Allison took "Parchman Farm," quickened the beat and added his renown brand of droll humor to the lyrics.

Though Allison's narrator claimed he "ain't never done no man no harm," by the last verse he sings, "Well I'm a gonna be here for the rest of my life /And all I did was shoot my wife."

Allison's first version was recorded in 1957. Seven years later, he did a new version called "New Parchman," in which he declares the prison "is loaded with rustic charm."

Allison's take on White's song launched a ton of covers. The third major Mississippi singer to record "Parchman" was Bobbie Gentry. who released it on her 1968 album The Delta Sweete.

1968 was the first time I'd ever heard the song. But it wasn't Bobbie Gentry's version. It was by the proto-metal trio known as Blue Cheer.

Portland rockers Dead Moon, who I suspect were inspired by Blue Cheer, covered it in 1988.

Then just last year, in their tribute to Gentry's The Delta Sweete, art-rockers Mercury Rev, with Dutch singer Carice van Houten, put their spacey stamp on the song.

And in 2018, a one-man band from Utah named Jacob T. Skeen, with the help of his puppet (!!!),  Mr. Bonetagels, revived the Bukka White version of "Parchman Farm."