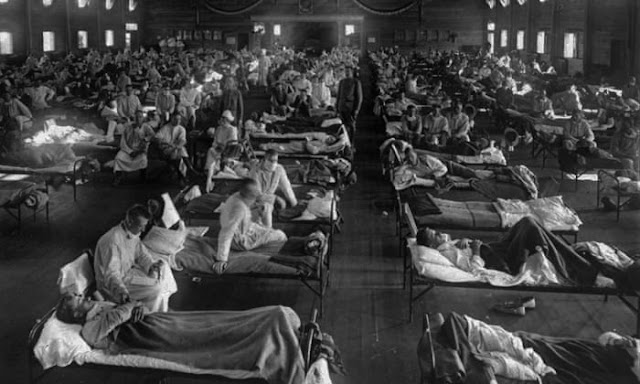 Is your brain numb from the non-stop onslaught of coronavirus news -- and the attendant deluge of White House gaslighting, partisan blather, moronic conspiracy theories and dumb jokes infecting social media?

No, this blog post is not the cure. But maybe I'll provide a little relief by posting a bunch of songs about infectious diseases, medical isolation and/or past pandemics.

Let's start with something by blues belter Essie Jenkins, a song titled "The 1919 Influenza Blues," in which she sang:

Down in Memphis, Tennessee
The doctor said it soon would be
In a few days influenza would be controlled
Doctor sure man he got had
Sent the doctors all home to bed
And the nurses all broke out with the same

In the year of 19 and 18, God sent a mighty disease.
It killed many a-thousand, on land and on the seas.
Great disease was mighty and the people were sick everywhere.
It was an epidemic, it floated through the air.

The doctors they got troubled and they didn't know what to do.
They gathered themselves together, they called it the Spanish flu.

A decade after the Spanish flu did most of its damage, another visually-impaired bluesman, Blind Lemon Jefferson recorded a tune about pneumonia. the associated medical condition that's fatal to many flu victims -- and to those who have succumbed to coronavirus.

Blind Lemon didn't blame God. Instead he pointed the finger at a "low-down gal.":

Meanwhile, in the mid 1930s, Big Bill Broonzy recorded a different song with the same name.

My friends told my wife, they done did all they could
They said "Put him in the hospital
Before he ruins the neighborhood ...

Mississippi-born Nehemiah Curtis "Skip" James had the knack of making something bad seem downright terrifying. Here's his "Sickbed Blues," which appeared on his final album Devil Got My Woman,"in 1966. Although there was not a pandemic going on at the time, the lyrics speak to the despair of being isolated while suffering from illness:

I'm layin' sick, honey, and on my bed
I used to have some friends but they wish that I were dead
In awful pain and deep in misery ...
I ain't got nobody to come and see about me