THROWBACK THURSDAY: He Was a Friend of Mine 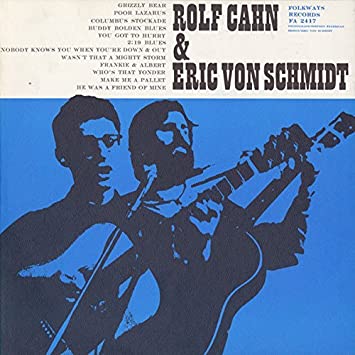 Yesterday, my friend Dave pointed me to a brand new video of jug-band guru Jim Kweskin and a young singer named Samoa Wilson singing a moving version of the old song "He Was a Friend of Mine" dedicated to George Floyd, who was killed last month after a Minneapolis police officer held Floyd under his knee for nearly nine minutes.

So I decided to look into the history of this song and was surprised and delighted to learn that I can honestly say this of one of the musicians responsible for reviving this song:

He was a friend of mine.

I'm talking about the late Rolf Cahn, a longtime Santa Fe resident who, before moving here, was a major force in the folk music scene in San Francisco and Cambridge, Mass. in the 1950s and early '60s
In 1961, Rolf and his pal Eric Von Schmidt were the first professional musicians to record the song, and the first to call it "He Was a Friend of Mine." It was on their album on Folkways record, which music writer Elijah Ward said "has not been treated well by history but was a seminal source for the folk-blues revivalists of the early 1960s."

But they didn't write the song. Ward points out that the source was a Texas prison inmate named Smith Casey ("or Smith Cason, or possibly Smith Carson,") who was recorded by John Lomax for the Library of Congress in 1939 at Clemens State Prison Farm in Brazoria, Texas.

Casey called the tune "Shorty George," which Ward says is related to a song by Lead Belly with the same title. (However, Mr. Ledbetter sang, "Shorty George he ain't no friend of mine.")

After Rolf and Eric recorded it, a young folkie by the name of Bob Dylan recorded it. However, Dylan's version was left off of his first album and didn't see commercial release until Dylan's first "bootleg" box set in 1991.

But Dave Van Ronk released what might be the definitive version on his 1962 album  Dave Van Ronk, Folksinger. As Wald points out, Van Ronk mistakenly credited the song to Bob Dylan.

Here's Van Ronk singing the song at the memorial service for folksinger Phil Ochs in 1976:

That same year, British pop singer Petula Clark recorded a French version called "Toi Qui M'As Fait Pleurer" (which translates to "You Who Made Me Cry." Just like Van Ronk mistakenly gave Dylan the songwriter credit, Clark's song credited Bobby Bare as the author. However, the lyrics Petula sang concerned a lost lover, having basically nothing to do with the story Bare, Van Ronk or Casey told.

So just for the hell of it:

The song saw another sharp change when The Byrds recorded it for their 1965 album Turn! Turn! Turn!. They turned it into an emotional lament for the assassinated John F. Kennedy.

Through the ensuing years many musicians have done the song, including  Ramblin' Jack Elliott and Jerry Jeff Walker, Willie Nelson (for the Brokeback Mountain soundtrack), Billy Bob Thornton (who did The Byrds' JFK version), Tom Jones and Cat Power, whose bleak, smokey version is subtly amazing.

But, in light of current events, the version that hit me hardest was the one by Kweskin and Wilson released this week for George Floyd.

If you have to steal away and cry, I won't judge you.