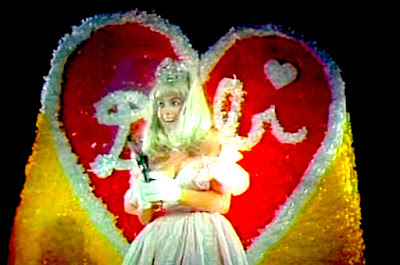 MTV was pretty vapid, even in its 1980s heyday. But one constant bright spot back during the Reagan era was Julie Brown, a comedian and actor.

The first time I ever saw her was a hilarious "man-on-the-street" -- or more accurately "man-on-the-beach" interview segment in which a bikini-clad Julie approached guys saying, "Do you think I'm pretty? Could you give me $20?"


Some clarification may be in order here. Back in the 80s, MTV was crawling with Julie Browns. There also was the Welch-born  "Downtown" Julie Brown, who hosted something called club MTV and was known for her catchphrase, "Wubba Wubba Wubba." I'm talking about the one born Julie Ann Brown in Van Nuys, Calif. in 1959, the host of MTV's Just Say Julie.

(And to be sure, this isn't about Miami Herald investigative reporter Julie K. Brown whose 2018 series blew open the case against pedophile financier Jeffrey Epstein.)

Here are some of my favorite Julie tunes, starting with this classic, "Trapped in the Body of a White Girl."

"My father's out of Harvard, my brother's out of Yale, well the guy I took home last night just got out of jail."

Of course in real life, Julie was a redhead. At least most of the time.

Though this 1984 parody of teenage death songs (you know, "Teen Angel," "Tell Laura I Love Her," "Last Kiss," "Leader of the Pack" etc.) undoubtedly was Julie's best-known song, let's just say it didn't age very well after Columbine and all the other school shootings that have plagued the  country in the past two decades plus.

Still I always chuckle at the line "Stop it, Debbie, you're embarrassing me!"