OPENING THEME: Let It Out (Let it All Hang Out) by The Hombres
One Night of Sin by Frontier Dan & The Hickoids
Dream of June by Barrence Whitfield & The Savages
Knoxville Girl by Charlie Feathers
The World Needs Sissies Too by Nick Shoulders
Bumble Bee Zombie by Rocky Erickson
Kicks and Chicks by The Zipps
Bikini Beach Party by Annette

EVERY MAN A KING set 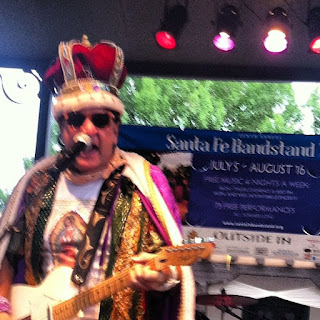 Quarantine Rock by Ramblin’ Deano & Jon Langford
What Happened to Delila by The Mekons
Just Don’t Care by Chuck E. Weiss
Bruce Grove Bullies by Chubby & The Gang
I Will Be by Dum Dum Girls
Bug Dance by The Treniers
Sam Hall by Tex Ritter

Big Black Mariah by Tom Waits
These Are My Friends by David Lynch
Priestess of the Promised Land by Stan Ridgway & Pietra Wextun
Bezrodna Nevesta by The Bulgarian State Radio & Television Female Choir
Walkin’ My Baby Back Home by Dan Hicks with Maryanne Price
I Dreamed of a Hillbilly Heaven by Eddie Dean
Head of the Table by Brook Blanche
Withered and Died by Elvis Costello
CLOSING THEME: Over the Rainbow by Jerry Lee Lewis

Did you miss my "Every Man a King" set? Listen to it below via Mixcloud