If you were writing a screenplay for a James Bond movie, you could come up with a far worse idea for a villain than the gorgeous daughter of a brutal, authoritarian Eurasian dictator who fancied herself an international pop star, but whose real job was running a major extortion and money-laundering operation.

But this is no spy thriller. It's the real-life story of Gulnara Karimova, daughter of Islam Karinova, the late dictator of the great nation of Uzbekistan.

She once was considered a probably successor to her brutal, corrupt father. But Gulnara's life turned into a horror show back in 2014, when, following a feud with daddy, was put under house arrest. The old despot's death in 2016 didn't help her.

And just last March, Uzbekistan's Supreme Court announced she'd been convicted of a slew of new charges of extortion, money laundering, misappropriating the property of others, and financial and other crimes. Before that conviction she reportedly sent a letter to the Uzbek government offering to return nearly $700 million to her country's treasury in exchange for dismissal of the charges. That didn't work. 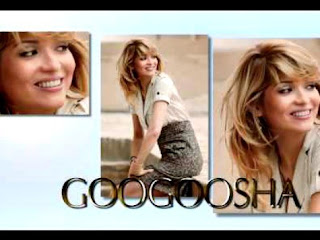 But this is a music blog, not a foreign affairs journal. So I'm concerned here with Gulnara's alter-ego, the glamorous, dazzling musical powerhouse called Googoosha, who earlier this century foisted her own brand of Euro pablum pop onto the languishing citizens of Uzbekistan.

Like so many single-named dance-music divas, the singer who performs under the hard-voweled alias Googoosha seems to exist in a cocoon of gauzy glamour shots, haute couture, and spot-lit soundstages. Unlike Ke$ha, Rihanna, Madonna, Shakira, Ciara, and Beyoncé, however, Googoosha’s output of grinding Euro disco and cheesy pop videos has barely registered on the cultural radar outside her homeland, Uzbekistan.

And there, according to a 2012 profile in the Daily Beast, Gurnara/Googoosha "is viewed as a `robber baron' by the majority of Uzbeks and is considered `the single most-hated person in the country.' "

Here are some samples of Googoosha's music from her happier days.


This one is a duet with the great French actor Gerard Depardieu:

Speaking of duets, what do Googoosha and Willie Nelson have in common? They've both done duets with Willie Nelson!

Here in the good old USA probably the closest thing to Googoosha we currently have is a young lady who dabbled in her own brand of pablum pop before her daddy started running for president. To Tiffany Trump's credit, she didn't try to use her daddy's presidency to promote her musical career and she's never been implicated in an international money laundering schemes.

And to daddy's credit, he didn't place Tiffany under house arrest after she recently posted a black square in support of justice for George Floyd on Instagram.

Just imagine a cheese-pop super group of Googoosha and Tiffany after Ms. Karinova gets out of prison.

Thanks to my brother Jack for introducing me to the magic of Googoosha. He met her in person years before her fall.