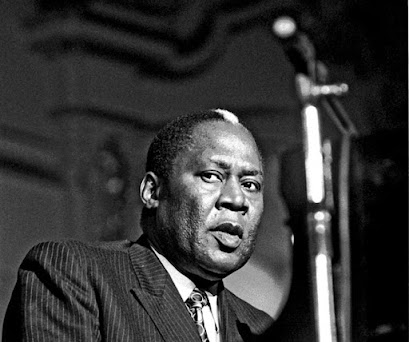 Today, Thursday Sept. 3,  would have been the 105th birthday of a Memphis-born bluesman born John Len Chatman, who blues fans know as Memphis Slim.
According to the Memphis Music Hall of Fame:
Chatman was exposed to the blues at a very young age by his family, whose members were some of the earliest blues musicians in the Mississippi Delta. His father Peter Chatman led a group called the Washboard Band, which featured the influential blues pianist Roosevelt Sykes. Inspired by Sykes, the young Chatman began to teach himself the piano and was soon touring in juke joints and dancehalls throughout the Southeast.
Like the story of many many blues artists, Slim migrated from the South to Chicago in the late '30s. He became cronies with other giants like Sonny Boy Williams and Big Bill Broonzy and later the likes of Willie Dixon and Matt "Guitar" Murphy.
He initially recorded under his father's name, and "Peter Chatman" was the name on his songwriting credits.
In the early 1960s, following his playing in the American Folk Blues Festival a European tour of American blues greats organized by Dixon, Slim decided to become a expatriate and move to Europe permanently.
Again, from the Memphis Music Hall of Fame:
In 1962, Memphis Slim decided to settle permanently in Paris, a city that had captured his heart and imagination during his European tours. “Back home I’d either be sitting around or hustling, but here I work all I want, eat tons of great food, and keep on having fun,” he told a reporter during this period.  ... “I don’t think anything I’ve done would have been possible here if I had stayed here,” he said during a 1976 trip to America.
He stayed in Paris until his death in 1988.
Below are some of my favorite Memphis Slim songs.
Slim recorded "Every Day I Have the Blues" in 1947, though he originally titled it "Nobody Loves Me."  Basically Slim's tune was was a reworking of the song "Every Day I Have the Blues" by St. Louis blues pianist Pinetop Sparks, who recorded it in 1935.) A few years after Slim's recording, blues and jazz artists like Lowell Fulson, Joe Williams, Count Basie and B.B. King recorded and had hit with it.
Here's his first hit single, called "Beer Drinking Woman," in which you can hear the direct influence of underrated bluesman Jack Webb.


This is a song he did with Willie Dixon. It's called "Rub My Root."
In 1973, Slim collaborated with Canned Heat for a record called Memphis Heat. That album wasn't as big as the band's work with John Lee Hooker, Hooker 'n Heat, (or as many of us wise asses called it "Hooker in Heat"), but it's worth hearing.
"Chicago Seven" is the very first Memphis Slim recording I ever heard as a budding blues fan back in the early '70s. KUNM used to play it regularly. Anyone following current events should realize the tune, despite being topical, is no less relevant  today.
But my favorite Slim tune has to this one, which basically became his signature song. Slim went back to Mother Earth in 1988, but, at the risk of sounding corny, his music is immortal.