This week's destruction of the Soldier's Monument in the center of Santa Fe's Plaza after decades of controversy  (read about that HERE) reminded me of an obscure song by a forgotten band of the late 1980s.

I'm talking about a group called The Toll from Columbus, Ohio fronted by a singer named Brad Circone. The Toll's debut album was titled The Price of Progression. I reviewed it in the March 3, 1989 issue of Pasatiempo, just a couple of months after I started my music column, Terrell's Tune-up.

The song I'm talking about is "Jonathan Toledo. "It was one of three songs on the album clocking in at more than 10 minutes. But it's the one I remember most because it hit close to home.

“Jonathan Toldeo made his home in New Mexico,” Circone repeats again and again in the refrain.

When Circone starts his [spoken] narrative, the locale becomes more specific. He is apparently describing the Palace of the Governors. 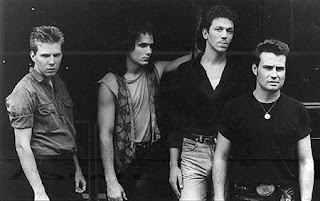 “I walked myself gently across the park / The elderly Indian women, they were all lined up against the wall / And I bet the reason that they have their backs against the wall / Is because they’re afraid we’re going to stick another knife in the / And then they’d really have to fall.”

(I noted in my review that the vendors would look pretty stupid if they sat facing the wall.)

He then goes across the street to the Plaza and becomes outraged by the Soldier’s Monument. In Circone's words there was an inscription that said, "This is in memory of all those white soldiers who lost their lives clearing the land for us to settle upon."

The inscription, of course didn't literally say that. However a plaque on one side of the obelisk commemorated  “heroes” who died in battle with “savage Indians.” (Of course, in the early '70s, a time in which the racist sentiment on the monument was under attack, some guy, dressed as a workman, quietly went to the Plaza one afternoon and chiseled off the word "savage." This vandal, who I've always thought of as a clever outlaw hero never was caught. And I don't believe he's ever come forward.)

Though The Price of Progression has been out of print for years, it recently became available digitally on iTunes and on Spotify.