Five years ago in my Terrell's Tune-Up column, I spotlighted an album called Halloween Classics: Songs That Scared the Bloomers Off Your Great-Grandma. Besides boasting one of the coolest subtitles in the history of the recording industry

It featured songs, mostly from the 1930s, pertaining to ghosts, corpses, dancing skeletons and other spooky subjects. (Sorry, there were no songs about vampires, werewolves or zombies in this collection.)

Here are a few of my favorites from the album. (More can be found HERE)

Let's start with a morbid little Depression-era ditty called "It Must Be Swell To Be Laying Out Dead" by Alex Bartha's Hotel Traymore Orchestra:

Rudy Vallee sang this 1937 tribute to Anne Boleyn, one of Henry VIII's exes, called "With Her Head Tucked Underneath Her Arm."

This one, by a band called The Prairie Ramblers, is called "Ghost in the Graveyard." It's from 1935.

Have a safe and terrifying Halloween. 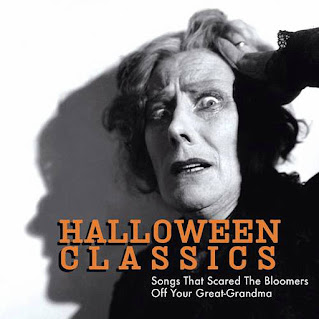