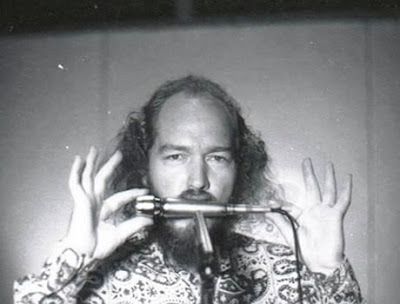 Ray Collins, the original lead singer of The Mothers of Invention, was born on this day, November 17, 1936.

After dropping out of high school (he'd gotten his girlfriend pregnant) Collins, the son of a Pomona police officer, started singing with an R&B covers band called The Soul Giants in Pomona, Cal. Among its members were drummer Jimmy Carl Black (a former New Mexico resident) and Roy Estrada on bass. And following a dispute with The Soul Giants' guitarist, Collins recruited a guy named Frank Zappa, who shared his love for old R&B and Doo-Wop, along with his sense of musical adventurousness.

Collins had a great background in doo-wop. He sang with local L.A. favorite Little Julian Herrera & The Tigers. You can hear his vocals on Herrera's "I Remember Linda."

Collins and Zappa, who had been friends since 1961, engaged in a side project called Ned & Nelda. This 1963 parody of the hit "Hey Paula" definitely was a pre-cursor to Ruben & The Jets.

Collins and Zappa co-wrote a song called "Memories of El Monte," which was recorded in 1963 by The Penguins. It wasn't nearly as big as the group's best-known song, "Earth Angel," but it's still pretty bitchen.

Zappa slowly took over The Soul Giants, which mutated into The Mothers of Invention. Here's a tune from The Mothers' first album, Freak Out (which later was re-recorded for Cruising With Ruben & The Jets.)


And here's the lead track of the Mothers' second album, Absolutely Free.

But tensions between Collins and Zappa were growing during this period. According to a 2009 interview with Collins in The Inland Valley Daily Bulletin:

[Collins] "had been ambivalent about the Mothers ever since Zappa relocated the band from Pomona to Hollywood to pursue a record deal. ... Quitting became a running joke.

"`I think I [quit] four times, maybe,' Collins says. "I didn't like doing that stuff onstage. Too much comedy, too much making fun of stuff. ...  I wanted to make beautiful music. I was raised on Johnny Mathis and Nat King Cole.' "

Collins did quit the band after Absolutely Free, but came back to sing on Cruising with Ruben & The Jets.

But I don't think Johnny Mathis done it this way.

Ruben & The Jets turned out to be the last gasp of Collins' music career.

In the Inland Valley Daily Bulletin interview, Collins said, "People will ask why it's been 40 years since I've been onstage. I don't know ... If you just enjoy life it's conducive to not being successful. You know what I mean? I just enjoy life."