Today, November 25, 2020, would have been the 174th birthday of radical prohibitionist Carrie Nation.
Happy birthday, Carrie.
Mrs. Nation -- who also was known as "Carry Nation," in case you think I'm guilty of a typo -- became famous for leading attacks on saloons in which she and her followers used axes to smash up these dens of inequity. She showed that Lizzie Borden wasn't the only 19th Century woman to "take an ax."
According to History.com, Nation described her June 6. 1900 raid on a saloon in Kiowa, Kansas:

“I ran behind the bar, smashed the mirror and all the bottles under it; picked up the cash register, threw it down; then broke the faucets of the refrigerator, opened the door and cut the rubber tubes that conducted the beer,” she recalled. “I threw over the slot machine…and got from it a sharp piece of iron with which I opened the bungs of the beer kegs, and opened the faucets of the barrels, and then the beers flew in every direction and I was completely saturated.”
She seems nice ...
As is the case of many American fanatics, Nation was inspired by The Bible and direct messages from God. In her own Bible, she wrote the word "smashing" besides this inspirational passage (Jeremiah 1:10):

"See, I have this day set thee over the nation and over the kingdoms, to root out, and to pull down, and to destroy, and to throw down, to build, and to plant."

She was either the John Brown of her time, or the Eric Rudolph, depending on your point of view.
Nation's dream of national alcohol prohibition came true in 1919. We all know how that worked out...
But this is a music blog, so to honor Carrie or Carry or whoever she was, here are some songs inspired by the temperance movement.
Let's start with "The Lips That Touch Liquor Will Never Touch Mine," with a melody by George T. Evans and words by Sam Booth. Unfortunately this 2016 recording bythe Women's Choir at Concordia College only includes the first verse.
This temperance tune, recorded in 1916 by singer/evangelist Homer Rodeheaver "Molly and the Baby Don't You Know" was about wives and children who suffered from an alcoholic husband and father.
Along those lines is "Father's a Drunkard and Mother is Dead," written in 1866 by one Mrs. E.A. Parkhurst. This recording is by Cincinnati's University Singers on an album released in 1997.
I couldn't do a post about temperance songs without including this Kinks klassic:
And I can't help but wonder how Mrs. Nation would feel about her name being used by a fictitious rock 'n' roll band in a notorious outrageously sleazy movie, Beyond the Valley of The Dolls. Ladies and gentlemens I present The Carrie Nations!
Tip a glass to Carrie Nation on her birthday! 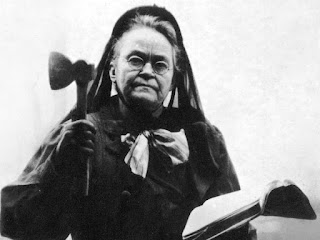