OPENING THEME: Let It Out (Let it All Hang Out) by The Hombres
Foggy Notion by Velvet Underground
All I'm Saying by Alien Space Kitchen
You Ain't Me by Reigning Sound
Nail My Dick to the Wall by The Toy Trucks
Sick to the Bone by Laino & The Broken Seeds
My Pal the Tortoise by Thinking Fellers Union Local 282
5 Anos de Aca by Rolando Bruno y Su Orquesta Midi
Set Me Free Rosalie by Los Lobos
Where is the Moon by Southern Culture on the Skids
Pig Ears by The Barbarellatones
That's Alright With Me by The Knoxville Girls
Taco Dreamin' by KevBev
If Drinkin' Don't Kill Me, Kill Me by Hickoids
The Flame That Killed John Wayne by The Mekons
Look Down That Lonesome Road by Roy & The Devil's Motorcycle
Something's in the Air by Honshu Wolves
Happy Birthday Bob! 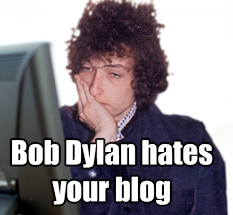 Everything's Broken by Bob Dylan
Gotta Serve Somebody by Shirley Caesar
Those Fabulous '60s by National Lampoon
Senor (Tales of Yankee Power) by Willie Nelson & Calexico
Royal Jelly by Dewey Cox
Blind Willie McTell by Bob Dylan
A Simple Desultory Philippic (or How I Was Robert McNamara'd into Submission) by Simon & Garfunkel
(Background Music: Mr. Tamborine Man by Duane Eddy)
Help Me Scrape the Mucous from My Brain by Ween
No Confidence by Simon Stokes
Big Boss Man by Tony Joe White
Bad Trick by Ray Wylie Hubbard
Poor Ellen Smith by Gillian Welch & David Rawlings
Down in the Willow Gardens by The Everly Brothers
Charlie James by Peter Case
Tile We Meet Again by Peter Stampfel
CLOSING THEME: Over the Rainbow by Jerry Lee Lewis