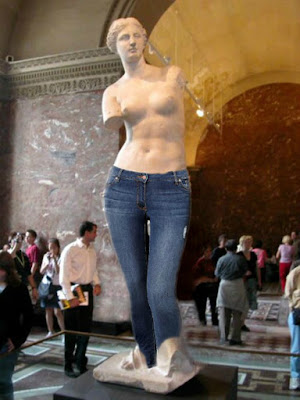 She's Venus in blue jeans...
On this day in 1873, 148 years ago, German-American businessman Levi Strauss and Jacob C. Davis, a Lithuania-born tailor working in Reno, Nevada, filed for a patent for a type of trousers that would become "an icon of American culture, and quite possibly the world’s most popular article of clothing."
Blue jeans.
As explained in Smithsonian Magazine:
It all started in 1871, when tailor Jacob Davis of Reno, Nevada, had a problem. The pants he was making for miners weren’t tough enough to stand up to the conditions in local mines; among other issues, the pockets and button fly were constantly being torn. “A miner’s wife came up to Davis and asked him to come up with pants that could withstand some abuse,” says curator Nancy Davis (no relation), from the American History Museum. Davis looked at the metal fasteners he used on harnesses and other objects. “At that time, he came up with the riveted trousers.”
As local miners snapped up the overalls he made with rivet-strengthened stress points and durable “duck cloth,” a type of canvas, Davis realized he needed to protect his idea. “He had to rush, due to the fact that these worked really well,” says Nancy Davis. “He realized he had something.” Lacking the money to file documents, he turned to Levi Strauss, a German immigrant who had recently opened a branch of his family’s dry-goods store in San Francisco, and the two took out a patent on a pair of pants strengthened with rivets.
... In the latter half of the 20th century—decades after Strauss’ death in 1902—blue jeans achieved widespread cultural significance. “They really come to their apex in the 60s and 70s,” Davis says. “The interesting thing is that this particular type of pants, the blue jeans, have become international,” she adds. “It’s what people think of. When they think of America, they think of blue jeans.”
In the 1950s, blue jeans became a symbol of tough-guy cool.
"James Dean’s costume department in Rebel Without a Cause, for example, used denim to mark out their leading man as a smoldering icon of youthful rebellion," wrote Tristan Kennedy in Vice a couple of years ago.
And naturally that smoldering  image of youth rebellion leaked over into rock 'n' roll.

Rockabilly wizard Gene Vincent had at least two songs that mentioned blue jeans in the title. The first was "Blue Jean Bop" from 1956:

But you didn't have to be a hard boppin' rockabilly to dig the denim. One teen-idol schmaltz peddler, Jimmy Clanton linked this style of trousers to Roman goddesses:

So did David Bowie: