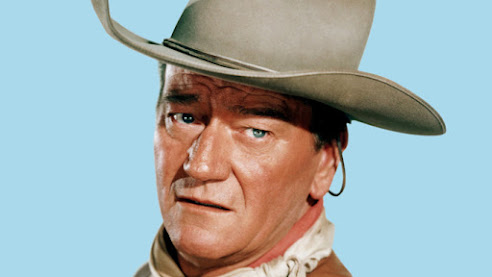 One hundred fourteen years ago, May 26, 1907, in Winterset, Iowa, Marion Robertson Morrison was born.

You may know him as "John Wayne" king of the cowboy movies.

Though he died of cancer in 1979, Marion was in the news because of his embrace of white supremacy in an old Playboy interview. His political conservatism was no secret. Hell, he publicly supported Sen. Joe McCarthy in the 1950s and for awhile was a member of the John Birch Society.

This post is to re-fight that battle. This is a music blog, so if you want to argue politics, take it to Twitter.

John Wayne made a major contribution to rock 'n' roll when Buddy Holly and fellow Crickt Jerry Allison picked up the Duke's catch phrase from his 1956 movie The Searchers. You might have heard this before:

Some John Wayne movies themselves had very bitchen songs. Here are a few of them, starting off with "My Rifle, My Pony and Me" featuring Dean Martin and Ricky Nelson (from Rio Bravo, 1959.)

Also in 1960, John Wayne starred as Davy Crocket in The Alamo, which had this song by Marty Robbins:
The Man Who Shot Liberty Valance (1962) is my favorite John Wayne movie. I also love the song of the same title, performed by Gene Pitney and written by Burt Bacharach and Hal David. The song didn't actually appear in the movie, but Pitney says Paramount Pictures paid for the recording.

To conclude, The Mekons did a song in the 1990s celebrating, in their own peculiar way, the legacy of Marion Robert Morrison: