OPENING THEME: Let It Out (Let it All Hang Out) by The Hombres
Busload of Faith by Lou Reed
Headin' for the Texas Border by The Flamin' Groovies
Smash the Fascists by Pocket FishRmen
Gila Monster by The Barbarellatones
The World's a Mess It's In My Kiss by X
Backstreet Girl. by Social Distortion
Ode to a Black Man by The Dirtbombs
The Glory of Love by Joseph Spence
Drunk Stripper by Bob Log III
Hush by The Plimsouls
Aloha Steve and Danno by Radio Birdman
You Can Count on Me by Los Straitjackets with Deke Dickerson
Love is All Around by Joan Jett
Eight Miles High by Husker Du
No Guilt by The Waitresses
Ain't That Lovin' You Babe by The Devils
Sick and Tired by The Ar-Kaics
Roky Erickson Tribute 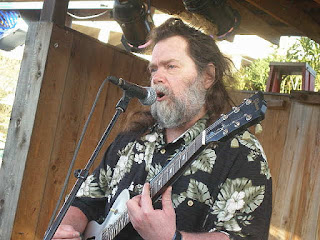 (All Songs by Roky Unless Noted)
I Think of Demons
Crazy Crazy Mama
White Faces by Blood-Drained Cows
Bumble Bee Zombie
You're Gonna Miss Me by Lucinda Williams
I Met Roky Erickson by Jad Fair & Daniel Johnston
Don't Shake Me, Lucifer
Bermuda
I Have Always Been Here Before by Hickoids
Don't Slander Me by Lou Ann Barton
Creature with the Atom Brain by Quintron & Miss Pussycat
Red Temple Prayer (Two-Headed Dog) by Margo Price
I Walked With the Zombie
Perfidia by Jon Rauhouse with Sally Timms
My Shit's Fucked Up by Kinky Friedman
Keep Me in Your Heart by Warren Zevon
Lonesome Susie by The Band
CLOSING THEME: Over the Rainbow by Jerry Lee Lewis