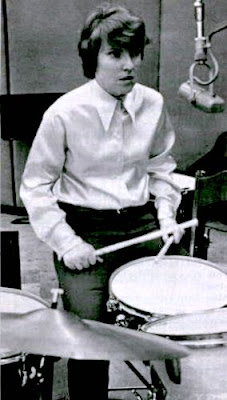 On this day in 1944, a girl named Maureen Ann Tucker was born in Queens, New York. She grew up to become Moe Tucker, the drummer of weird little group called The Velvet Underground,  which didn't sell many records while they were together, but went on to become one of the most influential bands in rock history.

Tucker, who played standing up, is almost always described as a "minimalist" drummer and often a "primitivist." But besides her pounding, she also occasionally took the spotlight, contributing vocals to three Velvets songs. In contrast to main singer Lou Reed's snarl, Tucker's voice was sweet, girlish, almost shy.

Reed wrote the song "After Hours," but he was quoted saying the tune was "so innocent and pure" that he couldn't possibly sing it. So Moe did:

Moe's other Velvet Underground vocal number, "I'm Sticking With You," like "After Hours," sounds childlike and innocent, but more playful. And yet when you listen to the actual lyrics, you realize the song actually is darker than you might have thought: "You held up a stagecoach in the rain / And I’m doing the same / Saw you’re hanging from a tree / And I made believe it was me ..."

After the Velvets broke up, Moe released several solo albums. Here's a tune from the early '90s where she sounds like a precursor to the riot grrl movement. (Lou Reed's on guitar here.)

And here Moe sings "Eye of the Hurricane" with Jad Fair of Half Japanese. The song appeared on Half Japanese's 1993 album Fire in the Sky.

Finally, here's another song from Tucker's 1991 album I Spent a Week There the Other Night. She's backed here by ex-bandmates Reed, John Cale and Sterling Morrison, the first time those four recorded together since Cale left the Velvets more than 20 years before.