When I think of songs about the Vietnam war, the first one that comes to my mind Country Joe & The Fish's "I Feel Like I'm Fixin' to Die Rag," However, for anyone who was out of diapers in 1966, the best know Vietnam song probably is  "The Ballad of the Green Berets" by Sgt. Barry Sadler (a New Mexico native, born in Carlsbad in 1940).  For some weird reason, Sgt. Barry's song got tons more commercial radio play than Country Joe's.

Encyclopedia Brittanica says Sadler's patriotic song with the military beat and bugles "reached No. 1 on the Billboard Top 100 chart in late February [1966] and stayed there for five weeks, going on to sell more than nine million records. The album sold some two million copies and hit No.1 on Billboard’s best-selling albums chart in early April."

Though it was more corny than a field in Nebraska,  I believe part of the appeal of Sadler's song was that the singer knew what he was singing about. Unlike John Wayne, who later starred in a spectacularly bad movie called The Green Berets (the soundtrack of which used a choral arrangement of the song), Sadler was no poser. He was a real combat veteran, a medic with the Green Berets who was nearly lost a leg after he stepped on a punji stick booby trap the year before he became a recording star.

He released one other album in 1966 called The A-Team, then the next year he dropped the "Sgt." from his stage name and released another album, Back Home, in which he posed in civilian attire (with no beret!) and contained songs not dealing with warfare.

But "Green Berets" was such a colossal hit, all of Sadler's subsequent musical efforts paled and failed in comparison. The public was quickly turning against the war and Sadler's songs that followed seemed like faint echoes of the one song of his we know.

After his music career stiffed, Sadler turned to writing. Starting in 1977, he wrote more than 30 adventure novels, most of which were part of a series called  Casca: The Eternal Mercenary. (Casca was the Roman soldier who speared Jesus on the cross. The Son of God wasn't amused, so he cursed Casca to live and fight wars until the Second Coming. (Other authors took over the series after Sadler died.)

Sadler's life became more troubled in the late '70s, as this 1989 Los Angeles Times story shows. He'd basically become a major lush and a womanizer. In 1978, while living in Nashville, Sadler shot and killed a wanna-be country singer named Lee Emerson Bellamy. The dead man was the ex-boyfriend of a woman with whom Sadler was having an affair. Bellamy allegedly was stalking and harassing the woman. 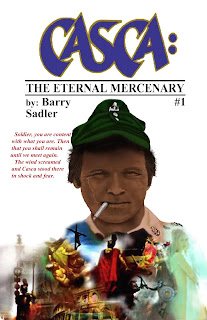 During a confrontation in his girlfriend's apartment parking lot, Sadler shot Bellamy, who'd reached for his pocket. Sadler thought he was pulling a gun, but in reality he was reaching for his car key. Sadler pled guilty to voluntary manslaughter and was sentenced to four to five years in the Tennessee State Penitentiary. However, according to the Times, "The judge later reduced the sentence to 30 days with two years’ probation. Sadler got off after 22 days on good behavior."

After all, silver wings upon his chest ...

In the early '80s, Sadler moved to Central America, where he wrote some of his Casca books. He also allegedly got involved with mercenaries, ran guns and trained the Contras for Nicaragua's civil war. (The Times article says, "The people who claim to know Sadler best say he nurtured the mercenary image only to sell books."

Almost exactly 33 years ago, on September 7, 1988, Sadler was shot in the head in Guatemala City. According to Brittanica, "Witnesses and the police said he accidentally shot himself. Others claimed he was the victim of a robbery or assassination attempt." He was brought back to the U.S., where he died in November 1989.

Even though it's hard for people my age to have avoided "The Ballad of the Green Berets," only the most die-hard Sgt. Barry fans know the rest of his musical repertoir. His follow-up was a song called "The A-Team," which, disappointingly, has nothing to do with Mr. T. (And for reasons best known to RCA Records, was not on the album of the same name.)

Sgt. Barry loved the women. He undoubtedly was thinking of some Hotlips Houlihan -- or several -- when he wrote this song.

Here's another tear-jerker from the Sarge