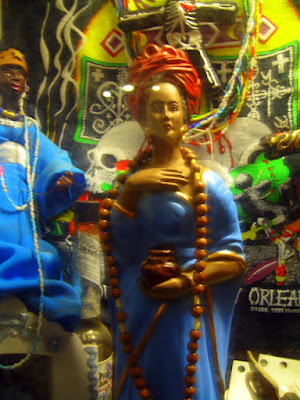 Tomorrow, September 10, is the birthday of Marie Laveau, the Voodoo queen of New Orleans, who was active for most of the 19th Century until her death in 1881. She would have been 220 years old today.

Marie, born a "free woman of color" in New Orleans, started out as a hairdresser. She also served as a nurse, tending to patients during outbreaks of yellow fever and and cholera.

But she became far more famous for her side gig of selling sold magic potions and gris gris (pouches of  herbs, stones, grave dirt and other hoodoo material), telling fortunes and giving advice to spiritual seekers of all stripes.

Marie is said to have had followers among the wealthy elite as well as by poor people. Her funeral is said to have been attended by many prominent whites. And when she died in 1881, the New Orleans Time Picayune editorialized:

All in all Marie Laveau was a most wonderful woman. Doing good for the sake of doing good alone, she obtained no reward, oft times meeting with prejudice and loathing, she was nevertheless contented and did not lag in her work. She always had the cause of the people at heart and was with them in all things. ... While God's sunshine plays around the little tomb where her remains are buried, by the side of her second husband, and her sons and daughters, Marie Laveau's name will not be forgotten in New Orleans.

And, as you'll see below, she inspired many songs.

But first, here's one of my favorite personal shaggy dog stories (or maybe more appropriately a shaggy cat story) from my hitchhiking days.

I paid a visit to that "little tomb" where God's sunshine plays back when I was 21.

It was in the summer of 1975, on my second great hitchhiking adventure. I was going down to Birmingham, Alabama (by way of Arkansas and Kansas City)  to help my friend, Julie move her stuff back to Albuquerque. I decided to stop in New Orleans for a few days.

There's an old superstition about going to the crypt of Marie and making a red X on the crypt with a brick. For good luck. So on my last day in town I decided to do that, just to get a little good hoodoo going for the last stretch of my trip.

So I found the cemetery where she's said to be entombed -- St. Louis Cemetery #1, though some have disputed that Marie actually rests there. There I went looking for her crypt. The rows and rows of big marble crypts all looked alike to me, so I just wandered around for several minutes trying to read the inscriptions on each one. It was very frustrating.

But then I saw the black cat.

The dang thing literally crossed my path so I decided to follow it. Was he an emissary of Marie? I followed the cat who turned a sharp corner . As I turned I almost bumped into this very tall, thin Black man in some weird, red Sgt. Pepper-like uniform.

“May I help you, sir?” he said in some kind of accent that sounded Caribbean.

I told him I was looking for the grave of Marie LaVeau. “Right this way,” he said and led me through the graveyard maze. I wondered whether this man might be an incarnation of Baron Samedi, Voodoo loa of the dead.

Whoever he was, he showed me the way to the white marble crypt covered with red Xs. On the ground, conveniently, were lots of pieces of red pieces of bricks. My guide disappeared before I made my X and asked Marie for her blessing for my travels.

Despite some bumps in the road, I like to think that I've traveled with that blessing ever since.

As I later wrote in my song "The Vagabond Treasure":

“Every highway has a demon, and buddy, I’ve met some. / But there are angels who will answer when you’re prayin’ with your thumb …”

But I didn't get there until a Sunday afternoon and the graveyard was closed. I was leaving town the next day, so I couldn't return to her tomb.

And apparently, a few weeks after that trip, some idiot vandal had spray-painted the crypt, coloring it pink. Shortly thereafte,r The Archdiocese of New Orleans closed St. Louis #1 to visitors except for paid guided tours. I didn't learn of this until I returned to New Orleans in 2019. I went back to the ceremon7 on a weekday during regular business hours.

I decided against paying for a guided tours when I saw that the tour guide was neither the tall guy the Sgt. Peppers suit nor a black cat.

But let's get on to the music.

This song, simply known as "Marie Laveau," was recorded in the early1950s by Papa Celestine's New Orleans Band.  It was later covered by Dr. John.

There was a spate of Marie songs in the 1970s. Holy Modal Rounders celebrated "Voodoo Queen Marie" on their 1975 album Alleged in Their Own Time. The melody here is borrowed from the old fiddle song "Colored Aristocracy"

Also in the '70s, the  Native American band, Redbone, helped spread the legend of  the "Witch Queen of New Orleans."

And even though it doesn't really have much to do with the historic Marie, Bobby Bare's "Marie LaVeau," written by Shel Silverstein, is a hoot.

Skipping ahead to the 21st Century, the Danish metal band Volbeat (not to be confused with the alt country band from Michigan, The Volebeats) showed that the legends of Marie have spread to Scandinavia.

And in 2013,  Tété, a Senegalese expatriate living in France, did his own haunting tribute to Marie,