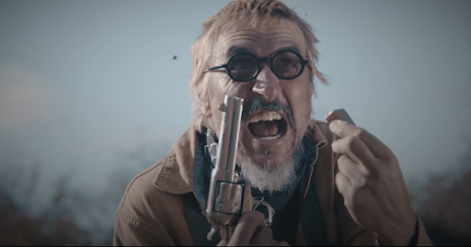 Les Claypool, the bass-plucking force behind Primus and many lesser-known bands (Sausage, Holy Mackerel, The Fearless Flying Frog Brigade and others) turns 58 today.

Happy birthday, Les. I remember when I was your age.

Unless you were completely deaf to early '90s "alternative" rock,  you already know that Primus was one of the most unique acts of the era -- a "power trio" (I bet Claypool hates that label!) that centered around the bass rather than guitar. And speaking of labels, Primus often was lumped into the "punk-funk" category along with the more popular but vastly inferior Red Hot Chili Peppers.

Besides Claypool's crazy talent (and guitarist Larry LaLonde and drummer Tim Alexander werent exactly slouches either) the main thing that set Primus apart was their humor and sense of absurdity.

So on this Wacky Wednesday, I present some of the wackiest Primus tunes.

The first song that drew me to Primus was the celebration of a murderous hillbilly called "My Name is Mud.":

On this song, Primus pays tribute to one of the finest members of the rodent kingdom, a big brown beaver:

One of my favorite Primus tunes is "Fisticuffs." Here's a live version from 2013:

Although Primus is associated with punk and funk, they've also been known to do amazing covers of country songs. Back in the '90s, they recorded a wondrous  version of Jerry Reed's "Amos Moses".  More recently (2003) they recorded and made a bitchen video for this  Charlie Daniels classic:

One of Claypool's most recent projects is his work with son of the Walrus Sean Lennon. Here's a tune from 2016, a touching tribute to a boy and his chimp:

Happy birthday, Les! Your name is never Mud on this blog.