Say the name "Freddie & The Dreamers" and Americans of a certain age (read: old) reflexively will start moving their arms and legs in a quasi-jumping-jack style and singing in a bad British accent, "I'm telling you now, I'm telling you right away ... " or,  "It's the thing to do, kids will envy you / Do the Freddie ..."

And this, Freddie and band have gone down in history as a two-hit wonder.

But this British invasion band, which put Manchester on the rock 'n' roll map two decades before The Fall, recorded more than 20 singles and several albums between 1963 and 1968, when the original group disbanded.

So this Wacky Wednesday we celebrate Freddie's less celebrated songs.

I remember seeing this one on Shindig in the mid '60s:

I remember this minor Freddie hit very fondly. I always thought it was The Dreamers' strongest tune, even though it wasn't nearly as popular as "Do the Freddie":

The first time I actually paid attention to this song was a version by The Hentchmen, with guest Jack White,  about 20 years ago. "Some Other Guy" is a Lieber and Stoller tune originally recorded by American R&B singer named Richie Barrett in 1962. Soon after that it was recorded by a British band called The Big Three, after which it became a frequent cover by Mersy Beat/British Invasion groups, including a little combo of Fab Moptops, who frequently played it on stage.

As "Some Other Guy" shows, Freddie was hardly averse to doing cover songs. For instance here's a Stephen Foster tune:

And like Sun Ra, Freddie & The Dreamers even did an album of Disney songs. This one's super: 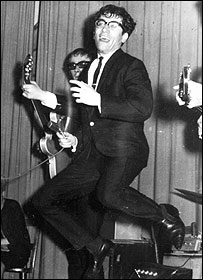