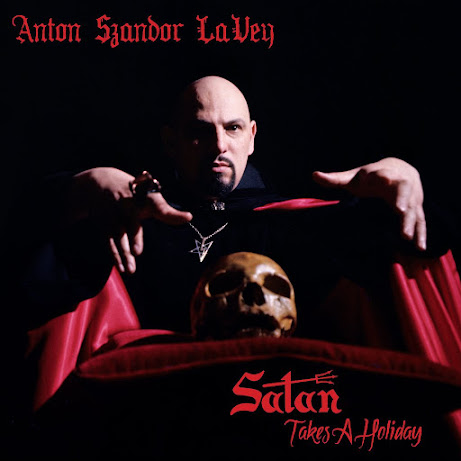 It almost being Halloween, what better time for some sweet, creepy calliope music from the founder of the Church of Satan?

Anton Szandor LaVey died Oct. 29, 1997 -- so we're just two days away from the 24th anniversary of that strange and mournful day.

Born Howard Stanton Levey in Chicago in 1930 (Really? What kind of Satanic priest is named "Howard"?!?!?), shortly after he was born, his family moved to the San Francisco Bay area. LaVey claimed he left high school to join the circus -- first as a roustabout, then later as a calliope player.

In 1966 he founded the Church of Satan, appointing himself as high priest.

But before you work yourself into a Satanic panic, according to the Encyclopedia Britannica:

LaVey presented Satanism not as the practice of evil or as the worship of an actual Antichrist but as a kind of ethical egoism. According to LaVey, traditional religions were fundamentally hypocritical and dangerously inhibited the physical tendencies and emotional needs that were vital to human life. He claimed that his brand of Satanism was inspired by his having noticed as a teenager that the men he saw at church on Sunday, praying to God for absolution, were the same ones he had seen at burlesque shows on Saturday night. LaVey’s Satanism was in fact atheistic: the opposition between God and Satan represented for him the struggle between hypocrisy and repression on the one hand and indulgence and liberation on the other. LaVey was also not a nihilist: he instructed his followers to obey the law, and he taught that indulgence in pleasure could be beneficial only if it did not harm others.

But he always was a showman. And during his life, in addition to the books he wrote about Satanic philosophy, LaVey recorded three albums: The Satanic Mass, Satan Takes a Holiday, and Strange Music (which later was released with a slightly different tracklist as The Devil Speaks (& Plays).

As the Allmusic Guide says, "... like any good horror movie, LaVey and his music do indeed haunt and, for some, delight."

So let's start out with LaVey's delightful version of "Harlem Nocturn." This is from the 1993 documentary, Anton Szandor LaVey - Speak of the Devil. Here he also talks about his loving relationship with the calliope.

Finally, it's time to swing your Honolulu Baby!