THROWBACK THURSDAY: Let's Get to Bob Bob Bobbin' Along! 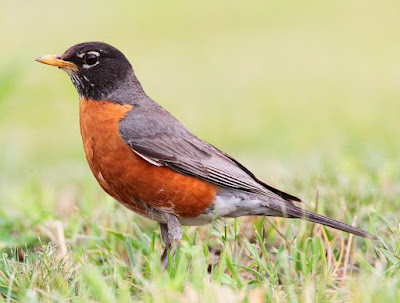 It's officially spring -- although yesterday in Santa Fe we all woke up to a winter wonderland, which, thankfully melted by afternoon. And, during my daily walk, I actually saw a red red robin, bob bob bobbin' on a neighbor's recycling bin.

So let's help nudge our sleepyhead spring to get up, get out of bed by celebrating a song that for nearly 100 years has been synonymous with the spring, "When the Red, Red Robin (Comes Bob, Bob, Bobbin' Along)."

This tune was written in 1926 by Tin Pan Alley's Harry Woods, who also wrote or co-wrote songs like "Paddlin' Madeline Home,"  "I'm Looking Over a Four Leaf Clover," "Side by Side," (that's the one that starts out, "Well we ain't got a barrel of money...") and "Try a Little Tenderness."

Woods' song about the bird was recorded by several singers in 1926, but Al Jolson's version is surely the best-known:

Starting in the late 1920s, "Red Red Robin" became the signature tune for actress Lillian Roth. (This recording was decades later, 1956 to be exact.):

There seemed to be a Robin revival in the '50s. For instance, Louis Armstrong took a shot at the robin in 1956...

But I believe my favorite version of this happy tune came even later. Texas singer Rosie Flores did this rockabilly "Robin" on a Bloodshot Records children's song compilation, The Bottle Let Me Down in 2002: