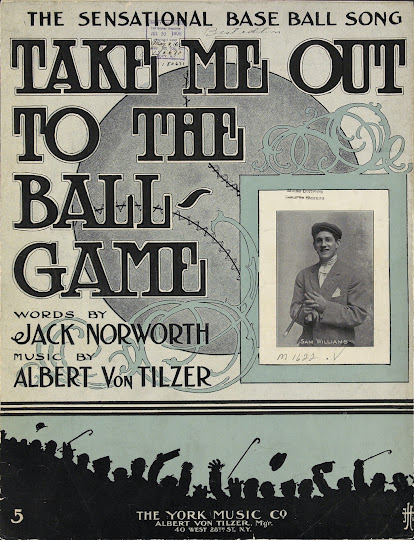 Today, April 7 is the official opening day of Major League Baseball's 2022 season. I predict that the song at the center of this post will be played hundreds of times in baseball arenas around the country during the next six months ago.

I'm talking, of course, about "Take Me Out to the Ball Game," a song that's become synonymous with America's Pastime in the past hundred years, even though, according to the Library of Congress, composer Albert von Tilzer as well as lyricist Jack Norworth, who wrote the famous tune in 1908, each claimed they'd never actually been to a ball game.

The article about the song on the Library of Congress site says:

Few musical creations embody such significance in American musical culture or rise to the stratum of Americana as `Take Me Out to the Ball Game.' Just why the song has enjoyed such lasting popularity has been the topic of sports commentators, journalists, and popular music historians for decades. After all, one author quips, "Stardust it ain't." Critics have described the lyrics as crude, but singable, and puzzle over the chartbuster's instant success. Fans of the song, however, insist that it is the sheer simplicity and straightforwardness of the words, gender-neutral and shrewdly crafted so as not to name or favor any one team, coupled with von Tilzer's luring waltz-like rhythms and unforgettable melody that sealed the baseball ditty's success.

The Major League Baseball site says, "it is generally acknowledged to be the third most-performed song in America in a typical year, behind only `The Star-Spangled Banner' and `Happy Birthday to You.' " (They apparently forgot about "In-a-Gadda-Da-Vida," but, you know...)

Like many songs of the early 20th Century, most modern folks only know the chorus of "Take Me Out to the Ball Game."  But actually, there are verses that tell the story of one Katie Casey, who was was "baseball mad."

The first recording of "Ball Game" in 1908 was by a funky dude named Edward Meeker:

In 1949 Frank Sinatra and Gene Kelly sang it in a movie called "Take Me Out to the Ballgame." By this time, for reasons I'm not sure of, "Katie Casey" had been changed, by Norworth himself (in 1927), to "Nelly Kelly."

Here's a sad trumpet version of the song, which appeared in the Ken Burns 1994 documentary series Baseball. It's by George Rabbai:

And here's an unusual, ukulele-backed version by The Skeletons

Having celebrities sing "Ball Game" at actual ball games has become common. Here's a transformational version by Ozzie & Sharon Osbourne during the seventh-inning stretch at Chicago's Wrigley Field in 2003:

Here's my favorite version of this song. It's by "Bruce Springstone," some kind of short-lived Flintstones/Springsteen parody act. But when I first heard it, I thought it was the actual Bruce:

Finally, "Take Me Out to the Ball Game" survived the change from Katie Casey to Nelly Kelly. But will it survive this?

Thanks to Cracker Jack's parent company Frito Lay which just recently introduced Cracker Jill to honor women in sports, there has been another lyric update. "Buy me some peanuts and Cracker Jill / No one can stop you if you have the will...”

Here's singer Normani with the new version.(And like just about any change these days, the introduction of Cracker Jill has sparked conservative culture-war OUTRAGE! Read the comments on the Youtube page and you'll see):