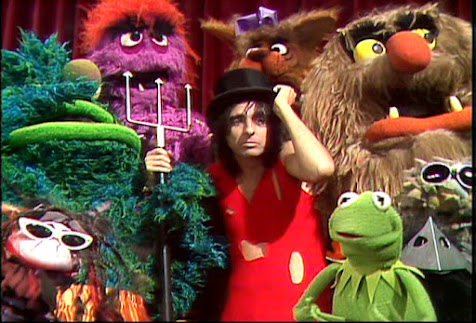 When the world first became aware of Alice Cooper, he was known as a fiend from Hell with a woman's name, a shock-rocker who bedazzled vulnerable youth with guillotines, snakes and demonic imagery.

Alice was a killer. But Alice also was a clown.

And by the end of the decade Alice no longer was a threat to God-fearing, flag-waving Americans. He was a cuddly, kooky comic, bringing his weirdness, with a wink in his eye and tongue in his cheek to national TV.

And Americans welcomed the friendly weirdo with open arms into our living rooms. He appeared on Hollywood Squares, Dinah, Phil Donahue and all sorts of tacky shows you probably wouldn't expect.

For example, here's Alice making fun of his own image on an episode of Tony Orlando & Dawn. Here he is in 1976 with the future New Mexico Music Commission member. (Music starts at 2:30, but the ound quality is pretty bad here):

As you saw, in pre-QAnon America, you could joke about "children chained to the wall" on a network variety show without any blowback.

Alice joined The Muppets in 1978

On April 25, 1975 ABC gave Alice his own national TV special, Alice Cooper: The Nightmare. It basically was an hour-long television commercial for Alice's latest album, Welcome to My Nightmare.

On the show, Alice played a guy named "Steven," who is trapped in some kind of nightmare world. His co-star was none other than Vincent Price who plays the "Spirit of the Nightmare."  On the show, Alice performed all the songs from the new album, as well as this classic, my favorite Alice Cooper song: