The international Make Music Day celebration, which began in France, is celebrating its 40th anniversary this year with free music events in more than a thousand cities in more than 100 countries across the globe -- including Santa Fe – on Summer Solstice, June 21.

But the impulse to make music around the time of the solstice goes back far beyond 40 years.

“I understand its roots go back to the Renaissance,” said Evan Galpert, who is working as a consultant for the city of Santa Fe helping coordinate Make Music Day events here. “It was a day for people to have a jovial time in their otherwise bleak lives.”

A 2019 article in the online publication Vox noted, “The date isn’t just significant for being the summer solstice. It’s also close to the Feast of Saint-Jean-Baptiste, or St. John the Baptist, a day that was historically marked by a major celebration in France (and is still a national holiday in Quebec), and which itself was partly chosen by the church to coincide with summer solstice celebrations. So the inclination to celebrate around this date has existed for centuries …”

There will be many ways to celebrate with music in Santa Fe on this Make Music Day.

Galpert described some of the events planned for Make Music Day events in the Santa Fe area. (And, as per the rules, all events are free.)

• Once again, there will be a drum circle at The Candyman Strings and Things, 851 St. Michael’s Drive, between 1 p.m. and 5 p.m. The store will be giving away ProMark drumsticks (while supplies last). This year there will be some steel drums available for playing, courtesy of the Panyard company.

• There will be musical performances on the patio of Cerrillos Station, 15B 1st St, in the village of Cerrillos. Among those performing are are singer Busy McCarroll (who first brought Make Music Day to Santa Fe in the 1990s), who will be performing with her elementary and high school age songwriting class, The Thunderstorm Club. They go on at 11 a.m. Also performing at this venue are Lucy Barna, who kicks off the show at 10:30 a.m.; Jasper McCoy, 12 p.m.; Jim Almand, 1 p.m.; and Charlie Overbey at 2 p.m. Other acts may be added.

• At the Southside Public Library, 6599 Jaguar Drive, there’s a harmonica instruction with Phil Arnold, with free Hohner Harmonicas to be given away at 10 a.m.; a “Uke Strum-along” with the Queen Bee Music Association at 1 p.m. and a Singing Circle with soul and folk artist Joseph Ewatuya between 2:30 p.m. and 4 p.m.

• Speaking of Queen Bee Music, they will be giving free guitar lessons at the Club Teen Center in Santa Fe Place Mall beginning at 3 p.m. There will be some Panyard steel drums available at the teen center for those who’d like to play them.

• Starting at 6 p.m. Tumbleroot, 2791 Agua Fria will have a special Make Music Day lineup featuring singer-Songwriter C.N. Byrd at 6 p.m., followed by Half Pint & The Growlers, playing jazz, swing and blues at 7 p.m. and electronic rock and pop by Dream Noise at 8 p.m.

• At Santa Fe Brewing Company, 35 Fire Place (off N.M. 14), Torri Taiko, a local group specializing in Japanese percussion instruments, will kick off the venue’s Make Music Day festivities at 6 p.m. Then C.N. Byrd, fresh off his Tumbleroot gig, will perform at 6:45 p.m.

• And this year, Santa Fe’s Make Music will include karaoke on the Plaza. Crash Karaoke Show, which hosts programs at various local venues, will bring the Santa Fe Karaoke Invitational to the 2022 Santa Fe Plaza Concert Series. This will feature the best karaoke masters – they’re shooting for 24 singers -- from all the Crash Karaoke venues. The show, presented by AMP Concerts, is scheduled to begin at 6 p.m.

But it’s not too late to register as a performer or a venue for Make Music Day. In fact, there is a plea on the local website for “representation from the Heavy Metal community” The site says, “Santa Fe has no shortage of great metal bands. So, let’s show the world what we’ve got!”

Businesses, schools, churches, and other institutions wishing to include their outdoor spaces as concert and musical activity locations also can register at the website.

You have until June 19 – two days before the celebration – to register. Go to www.makemusicday.org/santafe .  Venues must comply with COVID-19 restrictions.

History: Make Music Day has origins in the government of France. In October 1981, Jack Lang, the French Minister of Culture, appointed Maurice Fleuret, a composer and music journalist, as director of music and dance.

A national study had shown that showed that half of France’s young people played a musical instrument. That sparked an idea for Fleuret: He was determined to create a national festival dedicated to give all sorts of musicians – all ages, all genres, all skill levels, professional and amateur – the opportunity to perform. 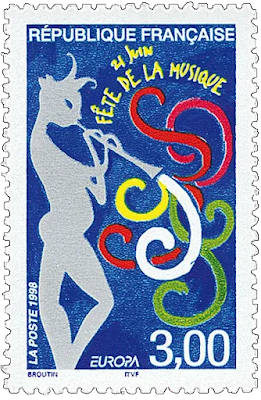 He called it “Fête de la Musique,” which he saw as  “non-directive celebration, which brings together all French people for whom music matters.”

In 1981, months before the first Fête de la Musique, Fleuret declared, “Music will be everywhere and the concert will be nowhere!”

Fleuret, in 1983, said. “We needed an event that would allow us to measure what place music occupied in individual and collective life. A spectacular movement of awareness, a spontaneous impetus to alert public opinion and perhaps also … the political class.”

As the culture minister envisioned, it wasn’t one big show on one big stage. Rather there were hundreds of performances “everywhere in the streets, squares, kiosks, courtyards, gardens, stations, squares …” according to the French Ministry of Culture’s website.

Within a few years the idea spread to other countries, including the U.S.

Make Music Day is a non-profit organization. If you’d like to offer a tax-deductible donation, please email santafe@makemusicday.org.