A version of this was published in The Santa Fe New Mexican
January 11, 2008

All of us who loved the original Flying Burrito Brothers should be taken aback by the billing on the new double CD, Live at the Avalon Ballroom 1969. It's credited to Gram Parsons with the Flying Burrito Brothers.
True, the late Parsons was the greatest talent in the band, but Chris Ethridge, "Sneaky" Pete Kleinow, and Chris Hillman (especially) were no mere sidemen. I suppose this album's billing was necessary because the late Kleinow kept the band alive for years and years cranking out increasingly generic country rock, almost as if Ringo had called his various touring groups the Beatles instead of his "All-Starr Band." But make no mistake; this is the original Burrito Brothers in all their ragged glory, captured live in two San Francisco shows in April 1969 when the Burritos opened for the Grateful Dead.

No, these tracks, recorded by Dead pal and LSD guru Owsley Stanley, won't displace The Gilded Palace of Sin — the Burritos' classic debut album. The sound quality is lo-fi, and the harmonies of Parsons and Hillman often are seat-of-the-pants.

But, containing some of the only live recordings of this influential band in its most creative period, Avalon Ballroom 1969 is essential for Parsons/Burritos fans.

There are lots of Gilded Palace tunes here — "Dark End of the Street," "Sin City," "Do Right Woman," "Hot Burrito #1," and "Hot Burrito #2." In fact, the latter two are included on both discs. (I'm still trying to figure out who's the uncredited organist playing like crazy on the "Hot Burrito" tunes.)

There are some of the band's good-time country stompers ("Close Up the Honky-Tonks," "You're Still On My Mind," "You Win Again"). And years before the hip world glommed onto Willie and Waylon, they covered Nelson's "Undo the Right" and Mel Tillis' "Mental Revenge," which was a hit for Jennings. And there are some cool rockers: Little Richard's "Lucille" and a hopped-up take on Roy Orbison's "Dream Baby."

In addition to the Avalon concerts, a couple of previously unreleased demos are ied here. The version of The Everly Brothers' "When Will I Be Loved" is basically a mess. But "Thousand Dollar Wedding," which years later would emerge on Parsons' final solo album, Grievous Angel, is stunning. It's just Gram banging a piano. But all the pain is there.

Even after two discs, I'm hungry for more. I wish the Brothers had done a version of "Christine's Tune," and — oh Mama, sweet Mama — where's "Juanita"?

Unfortunately, there's just not that much live Parsons-era Burrito material that made it to tape, so I'm just thankful for what we've got here. * Son of Skip James by Dion. They called him The Wanderer, but after this, they should call him The Thunderer.

This veteran rocker's new record is a pleasant and credible collection of (mostly) blues covers. It's loaded with too many familiar standards — "Hoochie Coochie Man," "My Babe," a couple of Robert Johnson tunes, and, of course, one by Skip James, "Devil Got My Woman."

But on this record, God trumps the devil for sheer rock 'n' roll power. I'm talking about a strange little tune called "The Thunderer," which is based on a poem by Phyllis McGinley (1905-1978) about the life of St. Jerome (not "a plaster sort of saint," McGinley and Dion tell us). Dion put the poem to music. He gave it thunder.

"God's angry man, his crotchety scholar/Was St. Jerome, the great name-caller/Who cared not a dime for the laws of libel/And in his spare time translated the Bible/Saint Jerome the Thunderer," Dion sings. "Quick to disparage all joys but learning/Jerome liked marriage better than burning/But didn't like women's painted cheeks/Didn't like Romans, didn't like Greeks/Hated pagans for their pagan ways/Yet doted on Cicero all of his days."

Dion's one of the only rockers tough enough to sing about doting on Cicero and get away with it.

It's a spare, minor-key song featuring Dion on acoustic guitar with Rick Crive. This is one of the strongest examples of religious rock since Bob Dylan's Slow Train Coming. 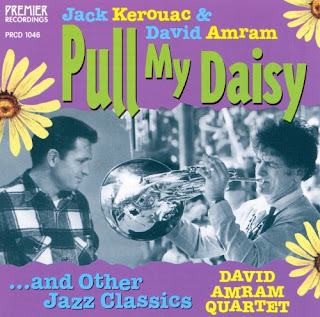 * Pull My Daisy ... and Other Jazz Classics by David Amram Quartet. The cover of this re-issued album is misleading. Above the title are the names Jack Kerouac and David Amram. However, this was recorded in the late '80s, about 20 years after Kerouac hit that great road in the sky.

But his spirit definitely is present in the title song, with lyrics written by Kerouac, Allen Ginsberg, and Neal Cassady. Jazzbo Amram, a singer, multi-instrumentalist and Kerouac pal, put the poem to music. It ended up as the theme song to a 1959 short film that became
a Beat Generation underground touchstone

The song is a jaunty little jazz number. Amram leaves out the dirty verses, but it's fun just the same.

He improvises some new verses about how out-of-sight it is to be playing for the good foia. ("If Jack himself were here, he'd be sitting on conga drums and sharing in this cosmic cheer.")

The rest of the album consists of standards: "Take the 'A' rain," "Summertime," "Red River Valley." Not bad background music. But not on the same level of cosmic joy of the title song.
at January 11, 2008