Here's my 90 eMusic downloads for this month: 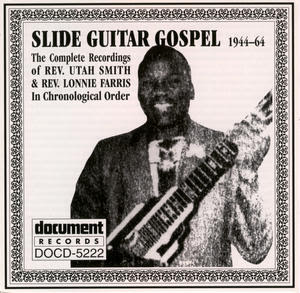 * Slide Guitar Gospel (1944-1964) by various artists (Actually only The Rev. Utah Smith and The Rev. Lonnie Farris.) Only recently was I turned on to The Rev. Utah Smith (sometimes called "Elder Utah Smith".) It was on the recent Sonic Nightmares podcast with Gringo Starr and Rev. Beat-Man. (Listen yourself HERE.) which featured Smith's song "Take a Trip." Gringo describes Smith, who started out as a traveling, electric-guitar slinging evangelist, donning "wings" and flying over his congregation (with the help of ropes and pulleys.)

So I sought him out on eMusic and found this great compilation on Document Records -- six Utah Smith tracks (including the one I heard on Sonic Nightmares) and 16 of the Rev. Lonnie Farris.

The Smith songs live up to the romise of "Take a Trip." The guy sang like Blind Willie Johnson and played guitar like a hopped up Sister Rosetta Tharpe. There's three versions of his song "Two Wings" here, but all are worthy. These songs were recorded in the '40s and '50s.

I came for Elder Smith, but I stayed for Rev. Farris. These are more recent recordings than Smith's -- from the 1960s I believe. His music sounds like a direct precursor of the Sacred Steel records we've come to know and love from Arhoolie.

But on some songs, Rev. Farris has a sax player. These are some of the grittiest recordings to ever come out of a church. 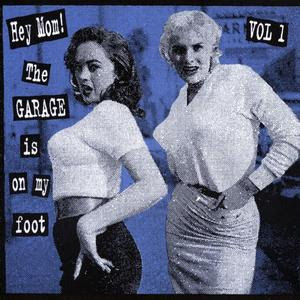 * Hey Mom! the Garage is on My Foot by various artists. Yes, one reason I downloaded this is because I like the cover.

Billy's pal Holly Golightly is represented with a hard-thumping fuzzbuster called "In You."

My favorite track here is "Haywire Hodaddy" by The Hodads. It's surf gone wrong, making The Trashmen look like The Lennon Sisters.

And hell, it's the closest thing eMusic has to "Hodad Makin' the Scene With a Six Pack" by The Silly Surfers. When is someone going to re-release the Silly Surfers/Weird-ohs album? 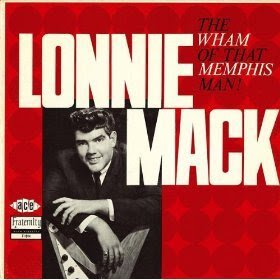 *The Wham of That Memphis Man by Lonnie Mack. Here's a classic 1963 debut album from an influential rock 'n' blues guitarist and underrated soul shouter.

It's from that post rockabilly/pre-Beatles period when rock 'n' roll supposedly had died. Maybe the teen idols ruled the charts, but the underground was alive with the likes of Lonnie Mack.

This album has plenty of Lonnie's best known instrumentals like "Memphis," "Susie Q" and "Wham," plus a generous helping of sweet greasy ballads, where Lonnie goes from a sob to a shout in nothing flat. 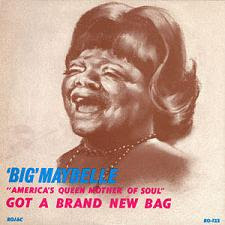 *America's Queen Mother of Soul Got a Brand New Bag by Big Maybelle. You got your ridiculous -- "The Eggplant That Ate Chicago" -- and you got the sublime -- "That's Life," yes, the Frank Sinatra tune. And both with "Mellow Yellow." This is a collection of mid '60s hits that some producer almost certainbly forced this blues shouter to sing. It wouldn;t surprise me if she hated it. And it's sure not Maybelle's best.

But it's a hell of a lot of fun. She turns "96 Tears" into a soul workout." Same with The Troggs' "I Can't Control Myself." And she pours her guts into the soggy, middlebrow Eddy Arnold hit "Turn the World Around the Other Way."

Had I been the producer of this record (instead of being 14 years old or whatever I was at the time, I wouldn't have let Big Maybelle touch the wimp-rock whiner "There Has to Be a Word That Means More than Love." She sounds as if she's trying to imitate Eartha Kitt here, but she ends up sounding more like Claudine Longet here. But she makes up for it with the electrifying "Black is Black." 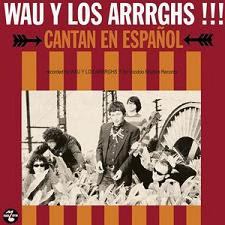 *Canten En Espanol by Wau Y Los Arrrghs!!!
There are some bitchen sounds coming out of Spain these days.
The Hollywood Sinners commemorated these guys, their fellow countrymen in song, and I gave them another listen when I was writing about Spanish-language rock in my recent review of Los Peyotes. The group's members include Juanito Wau, Satu Arrrgh!!!, Molongui Arrrgh!!!, Isidro Arrrgh!!! and Fletan Arrrgh!!!

This is their 2005 album from Voodoo Rhythm. About time for a new album, no? 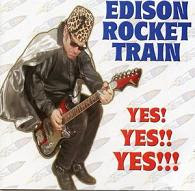 * Yes! Yes!! Yes!!! by Edison Rocket Train. I discovered this right after I got I Have Fun Everywhere I Go, the recent spoken-word CD by Mike Edison, a former editor of High Times, Screw, and some pro wrestling rag. Backed by a band including Jon Spencer, it's some of the craziest stuff I've heard all year. It was love at first listen (and you'll hear more about it in Terrell's Tune-up in the near future.)

This album isn't quite up to that level. But it's got a lot going for it. Just good crunching punk-ass blues with vocals (Mr. Edison I assume?) that sound like Captain Beefheart's criminal little brother. Spencer plays theremin on a couple of songs, but this is a blues explosion in its own right.

PLUS ... Four tracks from Passover by The Black Angels. I've been meaning to get this one for awhile. I saw these guys at The Roky Erikson Ice Cream Social in Austin during SXSW and I loved their latest album, Directions to See a Ghost. (It's on eMusic HERE.) Passover, the tracks I've heard at least, is the same kind of psychedelic guitar space rock. It seems to be full of anti-war songs -- "The First Vietnam War," "Sniper at the Gates of Heaven" "Young Men Dead," etc. Intense fare all around. I'll nab the remaining tracks when my eMusic account refreshes next week.
at November 08, 2008