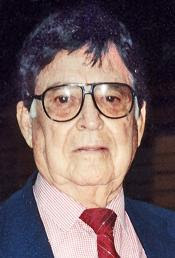 Some called him "the last of the patrons," although he hated that term. Some say he ruled Rio Arriba with an iron fist, especially during his time as sheriff. Others say he was one of the most generous leaders the state's ever seen.

When I interviewed back in 1984 for a Santa Fe Reporter cover story, he was clear: He helped people and he expected them to vote for him and his chosen slate in return. That was the system he knew and he made no apologies for it.

You can read my story in today's New Mexican about his life and death HERE.
at November 14, 2008