A version of this was published in The Santa Fe New Mexican
November 14, 2008 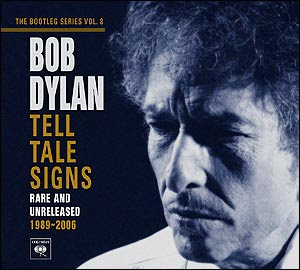 Bob Dylan has thrown away more great music than most will ever make in a lifetime. He’s been making records for more than 45 years, and he still has untold treasures to be mined.

Tell Tale Signs: The Bootleg Series, Vol. 8 is an inspired scavenger hunt through his outtakes, demos, unreleased live recordings, soundtrack contributions, alternate versions of songs familiar and otherwise, and other obscurities from the period between 1989 and 2006. In Dylan-album terms, that’s between Oh Mercy and Modern Times.

(Although Columbia calls this Vol. 8, their numbering is screwy. Volumes one, two, and three were released as a three-disc package in 1991. But the subsequent volumes, including Tell Tale Signs, have all been single volumes of two-disc sets. And the series doesn’t include the legal version of Dylan’s most famous bootleg of all, The Basement Tapes, which Columbia released in 1975. I don’t know why, but this kind of stuff drives me nuts.)

Most of this collection is culled from the sessions for Oh Mercy and Time Out of Mind (1997). There’s a song from 2001’s Love and Theft that appears twice here. I was surprised to learn that “Mississippi” was originally meant for Time Out of Mind but surfaced, in a much different version, four years later. The first take here, my favorite, opens disc one. It features Dylan backed only by the guitar of Daniel Lanois. But the second version, which opens disc two, isn’t bad. It’s got a full band, a slightly different melody, and a slow blues groove.

And don’t mistake this song for “Miss the Mississippi,” a Jimmie Rodgers classic that Dylan recorded in the early ’90s with David Bromberg (who plays guitar and produces.) This is a gorgeous little number with mandolins, fiddles, and a horn section mixed so subtly you almost think that you’re imagining it.

This is one of a handful of cover numbers included in the set. Dylan sings a jaunty take on Robert Johnson’s “32-20 Blues” (an outtake from World Gone Wrong, one of those folk-song albums Dylan made in the mid-’90s). From that same period, there’s a live solo version of an old folk tune called “The Girl on the Greenbriar Shore.” And there’s Reverend Gary Davis’ “Cocaine Blues,” recorded live in 1997 with a band that includes guitarist Larry Campbell and steel guitarist Bucky Baxter. It’s a decent rendition (with uncredited background harmonies that sound like a long-lost recording of The Band), though my favorite version is the one by Dave Van Ronk, which I first heard in the early ’70s).

One forgotten jewel uncovered here is “The Lonesome River,” which originally appeared on a duets album, Clinch Mountain Country, by bluegrass patriarch Ralph Stanley. When he and Dylan harmonize on the chorus, they sound like the world’s coolest geezers.

Then there’s a dignified version of “Dignity,” with Dylan accompanied only by a piano. The more familiar, more upbeat version with a full band (including a banjo that comes out of nowhere) was one of the greatest Dylan songs of the ’90s, even though it didn’t appear on any of his regular studio albums). But in the “piano demo” on Tell Tale Signs, the lyrics come out more. Of course, there are some lyrics on this version that most of us haven’t heard before, such as this: “Soul of a nation is under the knife/Death is standing in the doorway of life/In the next room a man fightin’ with his wife over dignity.”

There are actually two versions of “Dignity” here. The second one has a definitive rockabilly feel. It’s my least favorite of all the versions I know, but it’s still fun hearing how Dylan messes with his songs.

Some songs undergo even more radical transformations, which shouldn’t be shocking news for Dylan fans. “High Water (For Charlie Patton)” is a muscular blues stomper on Love and Theft, but the live version here is downright ominous, a rollicking battle royal between the guitars of Campbell and Freddy Koella.

Another live Love and Theft rocker is “Lonesome Day Blues.” Dylan is definitely one of the world’s most twisted blues singers, and this track helpowerful tune here is “Marchin’ to the City,” a gospelish song that builds in momentum. Augie Meyers (Sir Douglas Quintet, Texas Tornados) shines on organ.

I like some of the alternate versions better than the originals — for instance, “Everything Is Broken,” from Oh Mercy. The version here is raw swamp rock.

But one of the alternate takes on Tell Tale Signs unfortunately pales in comparison with the “official” version. The newly released “Someday Baby” sounds like an attempt to sound like a Daniel Lanois production without Lanois himself. It’s interesting, but I’ll take the sizzling blues version that was on Modern Times any day.

One surprise is how much soundtrack work Dylan has done in recent years. This collection includes songs from Gods and Generals (the eight-minute “’Cross the Green Mountain”), North Country (“Tell Ol’ Bill”), and Lucky You (“Huck’s Tune”). It’s too bad that Dylan’s roaring “Band of the Hand (It’s Hell Time Man)” from the 1986 movie Band of the Hand came out before the period covered by Tell Tale Signs. Maybe that song will be on a future volume of the Bootleg Series.