TERRELL'S TUNEUP: GIVE IT AIRPLAY

A version of this was published in The Santa Fe New Mexican
November 28, 2008

The reason I write this column, the reason I spend way too much time tracking down music — much of which most people will never hear and don’t care about — and the reason I do my own radio shows can be blamed on a disease I suffered in early 1962 — the measles.

I missed a week of school in third grade because of this ailment. And during that week, with the help of a transistor radio about the size of a pack of cigarettes, I discovered rock ’n’ roll radio. I’d listen religiously every night and sometimes during the day, enticed by the sounds of The Shirelles, Joey Dee & The Starliters, Ray Charles, Sam Cooke, and so many more, wafting in like the voices of sirens over that cheap little radio, each song introduced by a disembodied voice, some wizard of sound who seemed happy and excited — sometimes a little too excited — to spin his 45s and share his magical sonic gifts. 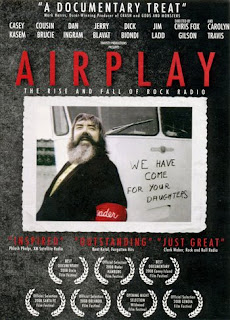 Everybody liked TV, of course. But television was for everyone. The radio, with its waxy little earplug, seemed like my private joy. But I wasn’t alone. Millions of young people throughout the land of the free were following the pied pipers of rock ’n’ roll radio. These messengers and their medium are the subject of Airplay: The Rise and Fall of Rock Radio, a documentary film by Chris Fox Gilson and Carolyn Travis, which shows during the Santa Fe Film Festival.

Alas, none of my heroes from WKY in Oklahoma are in this movie, but the film does tell the stories of many of the giants of rock radio — Rufus Thomas, Alan Freed, Cousin Brucie, Murray the K, and Wolfman Jack among them.

The basic story of Airplay, especially to longtime rock fans, is well known and oft-told: bored suburban white kids discovering black music on black radio stations and white radio getting in on the fun, with some white DJs blatantly imitating their African American counterparts. Then came Elvis, then the payola scandal. And by the time AM radio was getting corny and irrelevant in the late ’60s, along comes Tom Donahue, who pioneered “underground” free-form radio on the FM dial.

Though the tale is familiar, there’s enough tasty music and period news clips to keep Airplay lively. There’s a brief interview with Pat Boone, who downplays the element of racism in the opposition to rock. Talking about how rock ’n’ roll concerned “preachers, teachers, and legislators,” Boone says, “They thought it was going to be a terrible influence on young people not because it was black. Though that entered into it, I guess.” This is immediately followed by footage of some unnamed segregationist standing in front of a large “We Serve White Customers Only” sign, talking about setting up a “20-man committee to do away with this vulgar, animalistic rock ’n’ roll bop.”

Some of the old DJs interviewed tell wonderful stories of their youth. Dick Biondi, a Chicago radio giant who now resembles Harry Dean Stanton, tells a hilarious story of being irritated one day with his boss (“a pain in the butt, to be very honest”). Biondi described over the air what kind of car the guy drove (a gray Impala convertible) and told listeners to throw a rock through the window. One of Biondi’s fans followed through.

The strongest part of the documentary deals with payola. DJs were raked over the coals in the halls of Congress and in newspaper headlines for accepting “booze, broads, and bribes” from record promoters in exchange for airplay. The hearings were conducted by Rep. Oren Harris, who had previously tackled one of the other major devastating problems of that era — the fixing of television game shows. Payola destroyed the career of Freed as well as many other rock jocks.

The DJs speak candidly about payola. Cleveland’s Joe Finan, who lost a job over it, recalled a DJ convention in Miami in which Elvis Presley’s manager, Col. Tom Parker, brought in a hooker from Holland for the enjoyment of his favorite DJs. Philadelphia’s Jocko Henderson admits taking payola but says, “I would never take money for a record I didn’t like, ’cause if I didn’t like it, I wouldn’t play it.”

No, you can’t justify payola. Still, it’s pretty loathsome to see low-paid DJs persecuted by the very same type of self-righteous hypocrites who get all huffy when you suggest that campaign contributions might influence decisions they make in office.

The weakest part of Airplay is its discussion of the decline of rock radio. You go from the rise of disco to a brief tribute to KROQ in Los Angeles to MTV (with the obligatory playing of the Buggles’ “Video Killed the Radio Star”). There’s a short nod to hip-hop; then finally comes the era of satellite radio. In fact, much of the last few minutes of Airplay almost seems like an ad for XM and Sirius, which have apparently become the latest refuge for several golden-era rock jocks, like New York’s Cousin Brucie.

But there’s no mention of college radio, which became a major “underground” force in the 1980s, attracting untold numbers of rock fans who didn’t give a flying hoot about corporate radio or MTV. There’s nothing about Internet radio or podcasting, which appeals to those of us who don’t want to shell out big bucks to pay some megacorporation for satellite radio.

The truth is, neither satellite radio nor podcasts are going to incite actual teenage riots, as Freed did in the ’50s. I just fantasize that those radio waves from those early years are still bouncing around the universe somewhere and that someday some of them will find their way into the transistor radio of some kid with the measles on some distant planet.