TERRELL'S TUNEUP: MONSTERS ON THE LOOSE

A version of this was published in The Santa Fe New Mexican
November 21, 2008 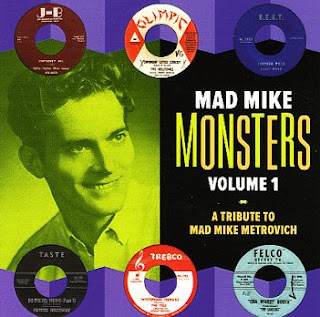 Writers, DJs, and hyperactive fans who champion music that’s obscure and out of the mainstream often have the desire to lift the wild geniuses and inspired outcasts they so love out of the shadows and give them at least a modest bit of the attention and acclaim they so richly deserve.

That wasn’t the case with “Mad” Mike Metrovich, a Pittsburgh disc jockey who became a broadcast institution on WZUM (AM, of course) in the mid-’60s. Mad Mike was infamous for going to dusty, old, out-of-the-way warehouses, buying thousands of 45s for pennies on the dollar, finding the craziest R & B, the greasiest doo-wop, and the most delinquency-inducing rock ’n’ roll for his radio show and the local teen dances he played — and for scraping off the labels so other DJs and fans weren’t able to find out what he was playing.

Lucky for us that Norton Records didn’t hide the artist and song-title information on Mad Mike Monsters: A Tribute to Mad Mike Metrovich, a three-disc collection (you have to buy the CDs separately) filled with dozens of the mad one’s favorites.

Not that anyone will recognize many — or perhaps any — of the names here. Except for Johnny Otis, who has a couple of 10-second radio plugs included in this compilation, the only group I recognize is The Sonics, whose garage hit “Psycho” is the first song on Volume 1.

Otherwise, the roster of artists reflects an alternate universe — Wild Child Gipson, the Grand Prees, Baby Huey & The Babysitters, Calvin Cool, Big Danny Oliver, Big Syl Barnes, and Little Ike. And no, the Marquis Chimps weren’t the actual apes who used to appear on television back in the ’60s, and Mad Mike & The Maniacs wasn’t led by Metrovich.

Just like radio listeners in Pittsburgh in 1965, you can enjoy the yackety saxes, the Reefer Madness-style piano, the piercing guitars, and the screaming Little Richard wannabes over dozens of tasty tracks with a certain sense of wonder. Who are these anonymous maniacs producing such intense sounds? Where did this stuff come from?

Some of the song titles in the collection sound familiar. “Goo Goo Muck” by Ronnie Cook & The Gaylads is a bizarre little ditty that was later covered by The Cramps. But “Camel Walk” by The Saxons, though similar to the one done by Southern Culture on the Skids, isn’t the same tune. And “The Hunch” by Mad Mike & The Maniacs has nothing to do with Hasil Adkins.

The songs are all from the days well before political sensitivity, so there’s some ethnic stereotyping not for the easily offended — like that in “Mama Ubangi Bangi” by The Four Sounds, complete with physical descriptions of a “Watusi Lucy” and jungle animal sounds, or “Chop Suey Rock” by The Instrumentals, a saxed-out, surfy instrumental introduced by a phony saying from Confucius. There’s a similar track called “Surfin’ in the China Sea” by The Hong Kongs. Then there are “Geronimo” by The Renegades, which includes sound effects of rifle fire and Indian war cries, and “Firewater” by The Premieres, another instrumental, which has someone trying to imitate a Native American.

There are songs that will bring to mind better-known tunes. “Uncle John” by Wild Child Gipson is basically an “answer song” to Little Richard’s “Long Tall Sally.” James “Red” Holloway’s “A La Carte,” with its shouts of “fried elephant lips,” “spider giblets,” and “baboon eyeballs,” sounds like a rewrite of Screamin’ Jay Hawkins’ “Feast of the Mau Mau” and “Alligator Wine” — although I can’t say for certain whether Holloway’s song came before or after Screamin’ Jay’s.

And some songs just sound dirty. There’s “Strollie Bun” by Blonde Bomber, for instance (“Where did you get that strut?” asks the singer, who sure doesn’t sound like a blonde). Even though “Cherry Juice” by Marino Choice doesn’t contain any overt obscenities, it sounds as if it could be from a lost “party” album by Jackie Wilson. Similarly, “Snacky Poo” by The Del Mars is even more suggestive (“Some people like it, some people don’t/Some people do it, some people won’t”). This sounds like the song Otis Day & The Knights would have been playing in the juke joint in Animal House right before the guys from Delta House walked in.

Mad Mike died on Oct. 31, 2000, just hours after doing his annual Halloween show. If not for Norton Records, most of this music probably would have died along with him. Listen and be amazed.

Grind it!: For those wanting to dig deeper beneath the underbelly of rock ’n’ roll: Mad Mike’s Monsters reminds me of another collection of crazy, obscure R & B and rock. That’s the Las Vegas Grind series, which came out in the mid-’90s on the tiny Crypt label. (Faithful readers of my blog might recall that I patriotically spent part of my $600 federal income-tax rebate check on a couple of volumes of Las Vegas Grind. I’ve since bought the other two CDs.)

It’s the same type of music you’ll find on the Mad Mike CDs. (In fact, one song is in both collections — Holloway’s “A La Carte.”) Supposedly, the music in the Grind series is what live bands used to play in Las Vegas strip joints in the late ’50s and early ’60s. There’s no evidence that any of the acts on the albums actually played Vegas or at topless bars anywhere. But it sounds like they should have. Most of these tunes could serve as the soundtrack for a yet-to-be-made movie version of James Ellroy’s American Tabloid.

I found my copies, which by the way, have some of the greatest cover art in the history of recorded music, on Amazon. (Hint: there are only four CDs, parts 1, 2, 3, and ... 6! Although there apparently were LPs of parts 4 and 5, the fourth CD is Part 6. Let the mystery be.)

You know I love playing stuff like this on the radio: tune into Terrell’s Sound World, free-form weirdo radio, starting at 10 p.m. on Sunday on KSFR-FM 101.1. And don’t forget The Santa Fe Opry, the country music Nashville does not want you to hear, same time, same channel on Friday.
at November 20, 2008