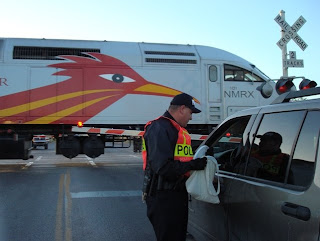 I guess this means my long-threatened train song special on The Santa Fe Opry will be Friday Dec. 12.

From the governor's office:

SANTA FE – Governor Bill Richardson today announced that after nearly a year-and-a-half of construction the New Mexico Rail Runner Express is ready to ride into Santa Fe. On Monday, December 15, 2008 the Governor will be joined by state, local and tribal officials, and several members of the public for the first inaugural train ride from Albuquerque into Santa Fe.

“This is a historic event that will bring long-term economic benefits to New Mexico and change the way we travel along the Middle Rio Grande Corridor,” Governor Richardson said. “During these tough economic times, the Rail Runner Express will provide thousands of commuters a much-needed savings while offering them a safe, viable and efficient transportation alternative.”

Commuter service into Santa Fe is scheduled to officially begin on Wednesday, December 17, 2008. On opening day, the South Capitol Complex Station at the State Government Complex north of Alta Vista Street and the Santa Fe Depot at the Railyard north of Paseo de Peralta, will be open to the public. Two additional stations, one at Zia Road and St. Francis Drive, and a stop in southern Santa Fe at I-25 and N.M. 599 are scheduled to open in the future.

“The Rail Runner Express will change the face of transportation in New Mexico,” said State Transportation Secretary Rhonda Faught. “With initial estimates of nearly 4,500 commuters riding the train between Albuquerque and Santa Fe on a daily basis, this will not only take a lot of stress off our roads, but will also enhance safety.”

“Bringing the train to Santa Fe represents the historic culmination of five years of hard work, and a significant investment in the future of New Mexico,” says Lawrence Rael, Executive Director for the Mid-Region Council of Governments. “As a regional organization, the Council of Governments has been proud to work with the Department of Transportation to make this project a reality. This is about our children having an alternative transportation system to work, play and travel in the region for generations to come.”

The New Mexico Rail Runner Express will run on zone-based fares, with a roundtrip fare from downtown Albuquerque to downtown Santa Fe costing $8. Throughout the first three months of service Santa Fe County residents will be able to ride the train free of charge by providing proof of residency such as a driver’s license. Finalized train fares and schedules are available at www.nmrailrunner.com.

On July 14, 2006, the New Mexico Rail Runner Express began serving commuters between Albuquerque and Bernalillo. Today, the 50-mile corridor between Bernalillo and Belen averages 3,000 commuters daily and has seen more than 1.3 million riders in the last two years. The New Mexico Rail Runner Express is part of Governor Richardson’s Investment Partnership, a $1.6 billion transportation and infrastructure initiative that is improving highways in New Mexico, creating new modes of transportation like the commuter rail and creating high-wage jobs.
at December 02, 2008