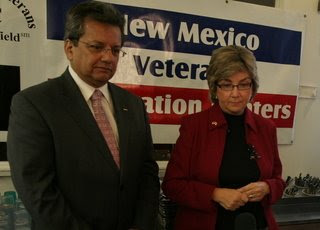 Here's a little Roundhouse rumor that might be worth reporting: I'm hearing that high on Diane Denish's list for a lieutenant governor is Veterans Affairs Secretary John Garcia.

Remember who appeared with Denish at that Albuquerque news conference last week right when the talk of Bill Richardson becoming Commerce secretary first broke? It was John Garcia. (Photo from that event by Kate Nash.)

Garcia supporters say that Republicans in 2010 might nominate Heather Wilson for governor, who is likely to stress veteran's issue. Garcia on the ticket could help blunt that.

Garcia is a Vietnam vet who served in the Central Highlands region in 1969 to 1970. He was deputy chief of staff for Gov. Bruce King and later was secretary of the Economic Development Department. Prior to his service in state government, Garcia was the executive director and CEO of the Albuquerque Hispano Chamber of Commerce.

Denish said Thursday that it's premature to be talking about her choice for lieutenant governor.
at December 05, 2008