A version of this was published in The Santa Fe New Mexican
December 26, 2008

Hank Williams III, as he shows on his latest album, Damn Right Rebel Proud, has a punk-rock soul, though he’s got pure country blood. Apparently his grandfather was some kind of country singer back in the old days.

After years of playing in hardcore punk bands, young Hank’s first couple of stabs at country music — Risin’ Outlaw (1999) and Lovesick, Broke & Driftin’ (2002) — showed plenty of talent, plenty of dedication to traditional country-music values, and an uncanny vocal resemblance to Hank Sr. But while both albums are decent examples of good retro country — the kind of music that his friend and mentor Wayne “The Train” Hancock is so good at — they aren’t much more than that. 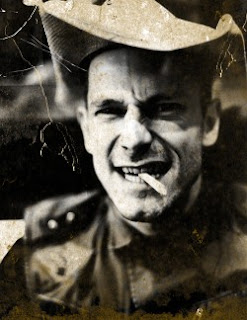 His artistic breakthrough didn’t come until a couple of years ago, with the release of Straight to Hell. With its dark imagery of backwoods violence, drinking, drugging, hell-raising, devil worshipping, and manic-depressive Southern-fried insanity, this two-disc album has a truly dangerous aura. All those themes have been well covered by previous artists, but somehow, Hank III presents them with demonic authority. The project culminates on the second disc with “Louisiana Stripes,” which consists of an acoustic murder ballad (“Louisiana Stripes” proper) followed by a 40-plus-minute aural collage featuring snatches of lo-fi, sometimes sonically distorted songs; ambient noises; a fragment of a religious sermon; creepy laughter; train whistles; wolf howls; and other frightening sound effects — kind of a hillbilly “Revolution 9.”

The album ensured that, unlike his father, Hank III would never be invited to share the stage with John McCain and Sarah Palin.

While there’s no 40-minute honky-tonk Hades tour on Damn Right Rebel Proud, the new album continues down the same basic path as Straight to Hell, with Hank III struggling with and frequently celebrating his demons — as the fiddles, banjo, and steel edge him on.

Unfortunately the album starts with a misfire. “The Grand Ole Opry (Ain’t So Grand)” basically deals with how the modern-day Nashville music establishment sucks the warts. It’s true, but it’s been said too many times before.

For me, the most interesting part of the tune is the refrain, in which he holds his dad, Hank Jr. (aka Bocephus), up as a rebel hero. “They were nervous about Waylon ’cause he had a crooked smile "For many many years they never wanted Bocephus ’cause he was too goddamn loud.”

Though Hank Jr. gets his praise in “Grand Ole Opry,” he doesn’t come off so well in a subsequent tune, “If You Can’t Help Your Own.” It’s a bluesy little number — one that Jr. might be partial to — that refers to rich relatives who never came around. If that’s a dig at dear old dad, who by all reports was absent during most of his son’s life, Hank III doesn’t dwell on it. In the last verse, the focus is on an uncaring government.

There’s a funny little ode to the late punk monster G.G. Allin here called “P.F.F.” (For the record, this isn’t the first country-rock tribute to Allin. The Drive-By Truckers did “The Night G.G. Allin Came to Town” years ago.) Hank’s song goes on for more than 10 minutes and comes in two parts — some good honky-stomp craziness for the first half or so and then an acoustic reprise with some sweet Dobro offering a counterpoint to the profane lyrics.

There’s tons of fun on the album. “Long Hauls & Calls” is a celebration of drunken craziness that could be used for the soundtrack of a chase scene in a Burt Reynolds hicksploitation comedy, as could “Six Pack of Beer.”

But Hank III doesn’t ignore the downside of nonstop hell-raising. The somber “Three Shades of Black,” with a melody that might remind you of “Ghost Riders in the Sky,” sounds like a song that Johnny Cash would have recorded on one of his latter-day albums. “Three shades of black is where I come from/Depression, misery and hellacious fun. ... We are a certain breed and we don’t like you/Some are junkies, some are freaks, and some are everyday ghouls.”

Definitely the most shocking song here is “Candidate for Suicide.”rhythm, but the lyrics tell the story of a “busted up and beaten down” soul for whom drugs have taken a heavy toll. Hank sings, “I’m a candidate for suicide/I was raped at 8 years old.”

That lurking death wish is also heard on the slow, dreamy “Stoned and Alone.” There he instructs a loved one, real or imagined, to “pick up the gun, dear, and put me to sleep.”
It’s hard to tell whether this album is a cry for help or a roar of defiance. Probably both. But it’s a noise worth hearing.

* If the World Was Upside Down by Joe West. This one might be good to cleanse your musical palate after Hank Williams III’s tales of drugs and depression. It’s an album of children’s music — perhaps the world’s first children’s record made by a guy who spends part of his time on stage as a time-traveling transvestite.

I’ll be honest — I vastly prefer Joe’s albums for adults. Give me South Dakota Hairdo or Human Cannonball any day.

But, as always with West, the music is top-notch. He’s backeders of the Santa Fe All Stars (Susan Hyde Holmes on bass, Sharon Gilchrist on mandolin, and guitarist Ben Wright) as well as by members of Hundred Year Flood and other Frogville cronies.

And yes, there are songs those of us over 3 feet tall can enjoy. “My Grandma” is a Southwestern answer to Bill Withers’ “Grandma’s Hands.” “Robots of Rayleen” is weird enough to love. He sings a good version of Michelle Shocked’s “The Ballad of Patch Eye and Meg.” And the simple yet beautiful melody of “On the Banks of the Rio Grande” is downright irresistible.
at December 26, 2008