TERRELL'S TUNEUP: IN PRAISE OF FUZZ

A version of this was published in The Santa Fe New Mexican
December 19, 2008 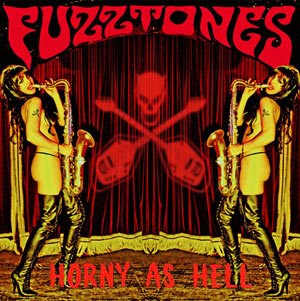 The Fuzztones have been around, in various forms, since the ’80s. They claim they used the description “grunge” years before the Seattle sound. Like The Fleshtones and The Cramps, they started out in New York. But The Fuzztones have gone through a number of personnel shifts and have moved around. The group was in California for a few years but broke up in the early ’90s after a major label deal flopped. T

he Fuzztones re-emerged this century, this time in Europe. Fuzzmeister Rudi Protrudi and his latest incarnation of the band have been based out of Berlin in recent years.

The ’08 model of The Fuzztones includes a horn section and a female chorus. King Khan & The Shrines, also based in Germany, must be a major influence on this punchy garage/soul sound.

Most the songs are Protrudi originals, though they cover a Pretty Things tune (“Alexander,” which features a guest appearance by Pretty’s bassist Wally Waller) and a Billy Gibbons tune — “99th Floor,” which he used to play with his pre-ZZ Top band, Moving Sidewalks.

There are some fine tunes here. “Black Lightning Light” features a lengthy minor-key spook-house-organ instrumental odyssey. This is one of several songs that originally appeared on The Fuzztones’ 2004 “comeback” album, Salt for Zombies.

Protrudi goes back even further in the Fuzztones’ catalog. For instance, my favorite song is probably a new all-hornied-up version of the old Fuzztones song “Ward 81” — which first appeared on their early ’80s debut album Lysergic Emanations. It’s a horrifying little tale of a psychiatric hospital: “Administer the medicine to my heart /Behind barred windows/The walls are whisperin’/Gotta flip a switch, pull out the stitches.”

If I’d been a Fuzztones fan since the start, I’d probably complain about all this recycling and demand more new material. But since I’m not familiar with the originals, I’m not complaining. It just makes me want to go back and catch up.

There’s some good junior-high humor here, Beavis. Besides the album title, which obviously refers to the new horn section (though the sax-playing she-devils on the cover are pretty sexy), some of the songs have titles like “Highway 69” (also from Lysergic Emanations) and the uncomfortable sounding “Johnson in a Headlock” (which originally appeared on Salt for Zombies). 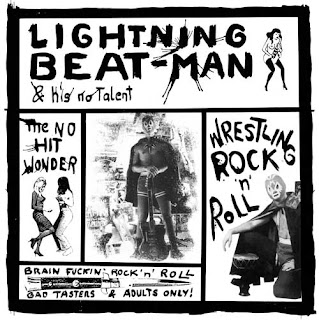 * Wrestling Rock ’n’ Roll by Lightning Beat-Man & His No Talent. On the subject of headlocks ... Here’s a Swiss-born one-man band in a lucha libre mask with a cheap four-track tape recorder. This is a rei(with three bonus tracks) of the long, long out-of-print first album by Voodoo Rhythm Records founder Beat-Man — also known as Rev. Beat-Man and also known briefly as Jerry J. Nixon.

The Lightning Beat-Man character came about circa 1992, when the young Beat-Man saw some Mexican wrestling on a trip to Los Angeles and was inspired to combine elements of that with the trash-rock that was his first love. The motto of his act in those days was “I fight on stage against me and my guitar and beat the shit out of it and win every night.” As this recording shows, he did his damnedest to live up to that and usually succeeded.

“Don’t want to talk like Hasil, don’t want to rock like Gene,” he sings in the opening tune and title song, evoking his heroes Mr. Adkins and Mr. Vincent. “I just want to be myself — wrestling rock ’n’ roll, that’s me/My name is Beat-Man.”

Most of the songs feature Beat-Man pounding the you-know-what out of his guitar and shredding his vocal chords as he sings bare-bones basic rock. One of my favorites is “Wild Baby Wow.” There aren’t many more words than the ones found in the title, and a couple of times Beat does a bridge that consists mainly of incomprehensible stuttering gibberish.

This review was published with the Christmas CD reviews in this week's Pasatiempo: 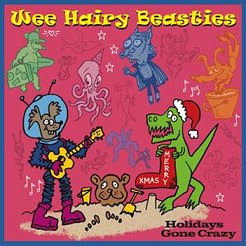 * Holidays Gone Crazy by Wee Hairy Beasties. Would you trust your children with members of The Mekons and their disreputable friends? Heck, I would. This holiday album is the second release from the Beasties, which specializes in children’s music. The group is made up of Mekons Jon Langford and Sally Timms, along with Bloodshot Records chums Kelly Hogan, Rick “Cookin’” Sherry, Tom Ray and Joel Patterson.

Warning Christmas purists: Despite the title and the funny reptile in a Santa hat on the cover, not all the songs here are holiday tunes — and some of the holiday songs are for other holidays. In fact, there’s just as many Halloween songs here.

But there are a couple of oughta-be Christmas classics here.

“The Night Before ...” is a spoken-word piece by Timms that joyfully mixes "A Visit from St. Nicholas" with Immanuel Velikovsky’s Worlds in Collision to create a weird dinosaur fable.

“Long long long ago, long before the world we know/a fiery comet struck the earth/ and filled the air with dust and dirt/ Blocking out the sunlight so/ that all was white with ice and snow.”
These naturally leads into “Dinosaur Christmas,” which ce lebrates “Santasaur,” “stegosaurus eggnog and “Jurassic bells.”

The Steve Terrell Christmas Special: It’s the most wonderful time of the year! Join me and my old pal Scott Gullet for two hours of yuletide cheer with my special friends, including Bobby “Boris” Pickett, Rev. Glenn Armstrong, Soupy Sales, Shane MacGowan, and oh so many more. The festivities start at 10 p.m. Sunday on KSFR-101.1 FM and streaming on the web at ksfr.org. (And don’t forget The Santa Fe Opry, country music as the good Lord intended it to sound. Same time, same station, Friday night.)

Speaking of Christmas Music: If you haven't heard my latest podcast, get to it! There's an hour’s worth of my favorite Christmas music. Take a listen to that and to my previous podcasts HERE. Listen at the Web site, download, subscribe — whatever makes you happy.
at December 18, 2008