TERRELL'S TUNEUP: EDISON IS THE LIGHT

A version of this was published in The Santa Fe New Mexican
December 5, 2008

Mike Edison is a journalist after my own heart. Just look at his résumé. He’s been a writer, editor, and/or publisher for a rich array of publications — Screw magazine, High Times, and Wrestling’s Main Event. Dang, he’s done everything but cover the New Mexico Legislature.

And he’s a rock ’n’ roller. He collaborated with the notorious G.G. Allin. He led a fine punk/blues group called Edison Rocket Train, which, back in 2005, released a sizzling little record called Yes! Yes!! Yes!!! 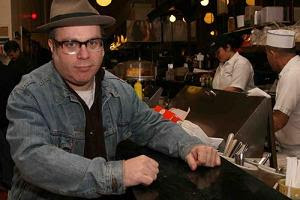 The album is a spoken-word affair, with Edison reading from the book over hard-driving musical backdrops produced by blues exploder Jon Spencer — an Edison crony who produced and guested on Rocket Train recordings.)

This first cut, “Pornography, Part I,” is a seven-minute tale of Edison’s years at the post-Al Goldstein Screw. (He describes Goldstein, the magazine’s founder and first publisher, as a “corpulent media whore and vociferous loudmouth, so filthy ... even other pornographers avoided him like a summons server.”) As a spacey guitar and weird science-fiction blips and bleeps rage behind him, Edison brags about his proudest achievement — the issue published during the 2004 Republican National Convention.

On other tracks, Edison describes his work at other magazines. In “Talking Main Event Magazine Blues” he tells about getting involved with the World Wrestling Federation during the mid-’80s heyday of Hulk Hogan. Punctuated by distorted drums and bass, Edison explains that wrestling was even looked down upon by fans of roller derby and women-in-prison movies. But, he says, “Those of us in on the joke were having a blast.”

Though he describes promoter Vince McMahon as a “visionary on par with Columbus,” Edison naturally hates the Hulkster, who was known for “wrapping himself in red, white, and blue and proselytizing to his army of teeny-bopper fans to stay in school and stay away from drugs. Frankly, he just wasn’t my kind of people.”

Then there’s a 10-minute-plus epic called “Ozzy, High Times, and Me.” (“The next person who suggests putting Bob Marley on the cover is gonna be looking for a new job!” Edison bellows at a staff meeting, as related in the opening lines of the song.) Here he tells the story of the time he put Ozzy Osbourne on the cover of the celebrated dope rag. Sometime during the photo shoot, $1,600 worth of premium illegal and dangerous marijuana went missing. So Edison leaked the story to the New York Post, which resulted in one of the biggest-selling issues in the magazine’s history, although leaking to the paper caused Edison problems with the stoners and “corporate hippies” on the staff.

One track is actually touching. That’s “G.G. Allin Died Last Night,” Edison’s tribute to his pal, whose concerts frequently turned into brutal, violent, obscene, and unhygienic spectacles. Over the sounds of a fuzz bass and wailing harmonica, Edison intones, “Beyond the bluster and beyond the broken glass, G.G. adhered to a cogent philosophy of rock ’n’ roll. Rock ’n’ roll as creator, rock ’n’ roll as destroyer.”

Edison talks about a barbecue that was the last time he ever saw his friend. Allin offered to put Edison on the guest list for his show the next night. But Edison declined. “We’re having a nice time. It was really good to see you. Why would I want to ruin that vibe by going to one of your gigs?”

With so much stale pabulum passing for rock ’n’ roll in these troubling times, this CD is a vital reminder of the importance of danger and sleazy fun.

* Gonzo: Music From the Film. Speaking of savage tales, there used to be this other writer ... 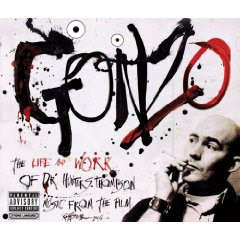 This recording consists of music and spoken-word snippets from the documentary The Life and Work of Dr. Hunter S. Thompson, which played at The Screen in Santa Fe last summer.

Some of the tunes — Brewer & Shipley’s “One Toke Over the Line,” “Combination of the Two” by Big Brother & The Holding Company, and The Youngbloods’ hippie anthem “Get Together” — also appear on the soundtrack album for the movie version of Fear and Loathing in Las Vegas.

But the strangest and most glorious of all is “Weird and Twisted Nights.” The track is credited to Thompson; his sidekick, cartoonist Ralph Steadman; and Mo Dean, wife of Watergate tattletale John Dean. This collaboration took place in 1979, during the shooting of the Thompson-inspired Bill Murray movie Where the Buffalo Roam. It’s a bouncy little pop tune with a Zappa-like meandering melody and lyrics like “Mangled bodies tell no tales and tell no lies.” I’m not sure who actually recorded this (the credits say it’s produced by Hal Willner); it’s lo-fi but sounds like there were professional musicians involved, especially the Clarence Clemons-like sax solo.
at December 04, 2008