WFMU, that great station from Jersey City started the thing, but other stations and venues have contributed. Lots of the tracks -- which you can stream as well as download -- are live performances in WFMU's studio.

Most of the artists here I've never heard of, but I'm quite familiar with some of them: Dengue Fever, Pierced Arrows (the new band from Dead Moon's Fred & Toody), Alan Vega, The New Bomb Turks, The Moaners (featuring Melissa Swingle of Trailer Bride), Edith Frost, Bobby Bare Jr., Xiu Xiu and more. 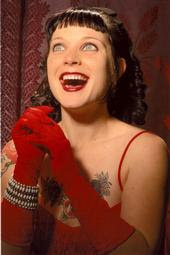 One of the most interesting sections in the archive is the Old-Time/Historic section. Not only are there some great old recordings by the likes of Sophie Tucker (the Last of the Red Hot Mamas!) and Billy Murray, but there are some interesting new artists dabbling in the old styles. There's Al Duvall (who claims to have been in 1877, nudge nudge wink wink) who reminds me a lot of C.W. Stoneking. And best of all, there's Singing Sadie. When I first listened to her songs "Put Down The Carving Knife" and "Everyone in Town Wants You Dead" I thought it was from some bizarre 78s from the '30s. I later learned she's "the all singing all dancing queen of the burgeoning underground show tunes scene. "

I've barely begun to wade through most of this treasure trove. Looking forward to diving in deeper.
at April 16, 2009