Here's a strange little political battle that brought back memories, mainly bad, of my home state. Seems like the Oklahoma State Legislature was just about name "Do You Realize" by The Flaming Lips as the official state rock song.

But then, Lips bassist Michael Ivins showed up at some ceremonial deal at the state Capitol wearing a bright red hammer & sickle T-shirt.

Politicians were aghast. Commies! Traitors! What kind of message does this send to the children?

Read about it HERE in the good old Daily Oklahoman.

A majority of the state House of Representatives passed a resolution for the song. But it didn't get the 51 votes needed to pass it. 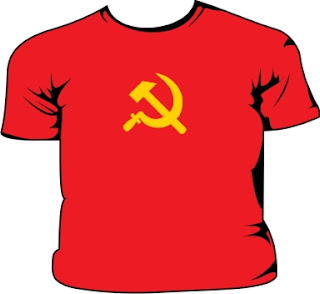 But Gov. Brad Henry stepped in and used an executive order to declare "Do You Realize" the official Oklahoma State rock song. Henry said the Lips have made "creative, fun and provocative rock music" for more than 20 years. There's some kind of official ceremony in OKC on Tuesday.

Of course not all Okies agree. Some commenter on the Oklahoman site called them a "cussing tele-tubby band." Sounds like a cool new sub-genre to me.

Speaking of bad memories, this reminds me of the time when Okemah, Okla. was in the planning stages of erecting the statue of its most famous native son, Woody Guthrie. The Oklahoman was beside itself. A statue of a known communist? What next, the paper asked, a statue of his hippie son Arlo?

But politics aside, is "Do You Realize" the best choice?

I would have preferred "Jesus Shootin' Heroin."