A version of this was published in The Santa Fe New Mexican
April 24, 2009 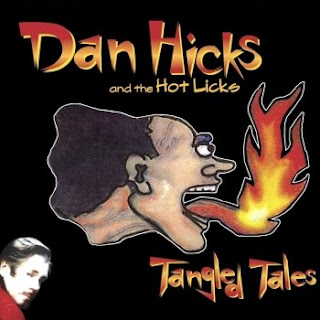 Here's the short version of this review: Tangled Tales, the new album by Dan Hicks and the Hot Licks, is Hicks' best album since he began his big comeback at the turn of the century — which means it's his best since his heyday in the early 1970s. Not bad for a cranky old codger rapidly approaching the big 7-0.

A little history of Hicksville for the newcomers: Hicks, in the mid- to late-'60s, was the drummer for a seminal San Francisco psychedelic outfit called The Charlatans (not to be confused with The Charlatans U.K., who came much later). Even back in his Charlatan days, Hicks had a genuine love for Western swing, traditional jazz, vaudeville, jug-band blues, country, and other American roots sounds. So he started a crazy little side project — Dan Hicks and the Hot Licks — that featured acoustic instruments and two female singers he dubbed The Lickettes.

Soon the side project would become his top priority. He left The Charlatans and recorded an album. Original Recordings was an admirable effort, with a couple of tunes that would become Hicks staples through the years —"I Scare Myself" and "How Can I Miss You When You Won't Go Away." But it wasn't until the next album, Where's the Money? — featuring a new pair of Lickettes — that the Hot Licks reached its stride. The group recorded two more albums, Striking It Rich (featuring the definitive version of "I Scare Myself") and Last Train to Hicksville (its subtitle, The Home of Happy Feet, provided a name for my favorite program on KUNM-FM 89.9).

And then in 1973, at the height of their popularity, Hicks and the Hot Licks broke up. Usual rock 'n' roll bummers, I suppose. After that, Hicks seemed to blow away. There was one album in 1978, It Happened One Bite, with Hicks and several of his old band mates. (It was recorded a few years earlier for a Ralph Bakshi cartoon feature that was shelved until the '80s.)

Hicks basically sat out the '80s and early '90s, at least as far as recording goes. His next album wouldn't come until 1994 — a live set called Shootin' Straight with a band called the Acoustic Warriors. Despite the discouraging lack of Lickettes, it was a decent album with some fine songs — which are reappearing slowly on Hicks' recent albums. (Five, yes five, of those songs appear on Tangled Tales.)

In 2000, Hicks returned, as did the Hot Licks name, with Beatin' the Heat. Since then, he released another studio album, 2004's Selected Shorts, plus two live albums.

Tangling the tale: The first difference a Hicks fan might notice between Tangled Tales and his two previous studio records is that the new one doesn't have a bunch of guest vocalists. Heat featured Hicks with Tom Waits, Elvis Costello, Ricki Lee Jones, and Bette Midler. Shorts had Hicks singing with Willie Nelson, Jimmy Buffett, and Gibby Haynes. While one has to admire the perversity of any album featuring Jimmy Buffet and one of the Butthole Surfers, such pairings sometimes seem to be based more on marketing than artistic considerations.

But on Tangled, the only guest stars are instrumentalists — harmonica giant Charlie Musselwhite, mandolin man David Grisman, and blues guitarist Roy Rogers. In each case, these aces enhance Hicks' sound without overwhelming it.

As noted above, nearly half of this album consists of songs from the long-out-of-print Shootin' Straight. Considering four others are cover tunes, that probably indicates that Hicks' songwriting is slowing down. You can't hold that against him, though. Heck, what has Willie Nelson written lately? Truth is, the new versions of "Who Are You?" (featuring some fine harp from Musselwhite), "Savin' My Lovin'," "13-D," "The Rounder," and "A Magician" are superior to the 1994 live versions. Maybe it's the addition of the Lickettes (who these days are Roberta Donnay and Daria).

Hicks' choice of covers hits the target, too. The song "Ragtime Cowboy Joe" was written especially for Dan Hicks (decades before his birth). I can't believe he's never recorded it before. Also a natural choice is "The Blues My Naughty Baby Gave to Me." A far less obvious choice though is Bob Dylan's "Subterranean Homesick Blues." But, aided by Rogers' slide guitar and those lovely Lickettes, this somehow evolves into a Dan Hicks song before your very ears.

Even more surprising is Hicks' inclusion of "Song for My Father," written by jazzman Horace Silver. It's slow and smoky, almost a bosa nova. It might remind old Hicks fans of "I Scare Myself." But what's unlike the Hicks we thought we knew is the raw sentimentality of the lyrics, a sweet tribute to the narrator's father. In the past when Hicks has done sentimental — I'm thinking of songs like "My Old Timey Baby" — it has usually been campy. That's not the case here. And it works just fine.

One of my favorites is "The Diplomat," a jaunty little tune. It contains weird lines that haunts a listener through the whole album: "I go in to cash a check so I can buy a fern/The bank is out of money and besides it's not my turn." I'm not sure why the image of Hicks buying a fern — and standing in line at the bank to accomplish that — seems so funny. But it is.

And then there's the title song, which is a fast-paced bopper featuring Hicks and the ladies scat-singing. It's an impressive display. That comes right before the album ender, "Let It Simmer," which slows things down as Hicks advises listeners to slow down and take it easy. As the song winds down, a male chorus sings in the background "Where's the money? Where's the money?," which hearkens back to the early days of Hicks' career.

Hicks knows by now that there ain't no money in the music biz for the likes of him. Thankfully, he still does it for the love.