A version of this was published in The Santa Fe New Mexican
April 10, 2009 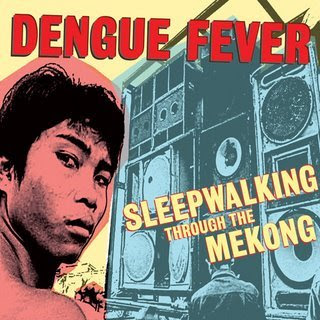 Dengue Fever is an amazing California band that has helped revive the crazy psychedelic sounds of pre-Khmer Rouge Cambodia. Back in 2005, the band traveled to Cambodia — not only the land of its musical idols, but also the home of its lead singer, Chhom Nimol.

That tour — Nimol’s first trip home since she’d immigrated to this country five years before — is the subject of a rocking documentary called Sleepwalking Through the Mekong, released on DVD next Tuesday.

Directed by John Pirozzi, the film follows the members of Dengue Fever as they visit Cambodian marketplaces (where merchants are amused by guitarist Zac Holtzman’s Mr.-Natural-as-a-young-man beard and bassist Senon Williams’ height); a school where the band shares songs with a group of children; a studio where Dengue jams with masters of traditional Cambodian instruments; a karaoke bar where a couple of Dengue members sing with some locals to “I’m 16,” an old Cambodian pop hit; and various stages where the group performs its surf-a-delic sounds — nightclubs, an outdoor festival in a shantytown, and a CTN (Cambodia Television Network) studio, where the musicians are special guests on a variety show that makes Mexican television look tame.

But as fun and enlightening as Sleepwalking is, there are some basic unanswered questions that leave a viewer not quite satisfied. And these oversights deal directly with the East-meets-West story that is central to Dengue Fever’s appeal. First of all, there’s the question of how the band got so interested in Cambodian rock in the first place. According to allmusic.com, keyboardist Ethan Holtzmann fell in love with the sounds of Cambodian psychedelic rock of the late ’60s and early ’70s — Sin Sisamouth, Ros Serey Sothea, Pen Ron, and others — when traveling in that country in 1997 with a friend (who got the disease for which the band was later named). But what was Holtzmann doing over there in the first place? Was it some music endeavor? Was he an archaeologist studying Angkor Wat? Just bumming around? I would have liked to have heard him talk about this.

But more important is the story of Chhom Nimol. There’s a segment in which Nimol talks about how difficult it was coming to the U.S. by herself. Through interviews and publicity material, we’ve been told that she was a successful singer in her native land. She “sang regularly for the king and queen of Cambodia,” a press release from the filmmaker says.

The question is, Why did she come here? Was it to further her musical career? According to Dengue legend, she had a long-term singing gig at a Southern California Cambodian nightclub called The Dragon House before she joined the band (which led to the title of the group’s second album, Escape From Dragon House). I want to know more about her career in Cambodia. When she played before the king, was it command performances at state dinners or more like an American high-school band playing at the president’s inauguration?

A Cambodian music teacher interviewed in the film tells us, “The Khmer Rouge killed all the famous singers.” Indeed, those commie thugs who ruled the country between 1975 and 1979 killed artists, intellectuals, professionals, and a third of the population during their time of power. The DVD has a smattering of footage of what looks like real cool Cambodian teen-exploitation movies from that mod à go-go era. But I’d like to hear more about those wonderful Cambodian singers whose music inspired Dengue Fever — and to whom the film is dedicated.

When Dengue Fever is playing music in this film, frequently there are shots of audience members looking enraptured. Such images of adoring fans aren’t exactly rare in rockumentaries. But wouldn’t it be great if there were a Velvet Underground effect here — if, as the rock ’n’ roll truism goes, anyone who saw them in Cambodia started a band of their own? Perhaps dozens of bands will pop up there, take the music, and mutate it into something new and powerful.

Quick word on the CD: Sleepwalking Through the Mekong comes packaged with a soundtrack CD as well as the DVD. If you don’t already have Dengue Fever’s three albums, this could serve as a decent introduction. But long-time fans will be disappointed. Too many Dengue Fever songs here are the same versions that are on their previous albums — “Tip My Canoe,” “One Thousand Tears of a Tarantula,” “Hold My Hips,” and “Hummingbird.”

There is a live version of “Ethiopium” (inspired by the music of another nation with a fine little rock scene that was crushed by evil comrades in the ’70s). But there should have been more. The movie has lots of live material that should have made it here.

There is some worthwhile new Dengue material, such as the instrumental “March of the Balloon Animals,” plus some nice jams with some of the masters of traditional Cambodian instruments featured in the film. One good thing is that there are handfuls of the old original Cambodian rock classics here by Sisamouth and Sothea, including “Mou Pei Na (From Where)” by both singers and “Dondung Goan Gay” by Meas Samoun, which sounds as if it could have been inspired by Santana.

Dengue radio: Hear a huge dose of the Sleepwalking on the Mekong soundtrack and more Dengue Fever and immortal Cambodian rock on Terrell’s Sound World, freeform weirdo radio, 10 p.m. Sunday. And don’t forget The Santa Fe Opry, the country music Nashville does not want you to hear, same time on Friday, both on KSFR-FM 101.1.