A version of this was published in The Santa Fe New Mexican
April 3, 2009

Think of Elvis crooning "Wooden Heart" with the puppets in G.I. Blues. Think of John Lennon rocking out with a toilet seat around his neck as he, Stu Suttcliffe, Pete Best, and the other Beatles entertained hopped-up, drunken sailors in various night spots along Hamburg's Reeperbahn.

Indeed, some strange rock 'n' roll hoodoo was cooking up in Germany in the early 1960s. And those with ears to hear realize that these cosmic forces, harnessed perhaps by U.S. military intelligence, culminated in an obscure but influential band called The Monks.

Though their lone "official" album Black Monk Time, was not released in the U.S. during the '60s, it became an archetypal cult classic — its praises sung by the likes of Jack White and The Fall's Mark E. Smith. 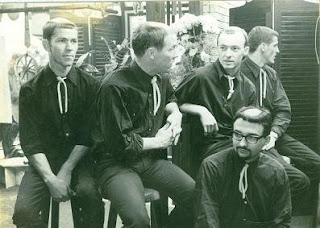 But it's available now. A company called Light in the Attic is re-releasing Black Monk Time and issuing a new compilation of lesser-known recordings called The Early Years, 1964-1965. Though you can't buy the CDs until April 14, you can listen to both HERE. (You have to register, but it's worth it.)

For those not familiar with the story of The Monks, the band was the product of the
U.S. Army. Gary Burger, David Havlicek (aka Dave Day), Larry Clark, Roger Johnston, and Eddie Shaw were American soldiers stationed at Geinhausen, east of Frankfurt. According to the Early Years liner notes, Burger originally was into country music, while Day was an "Elvis worshipper." The two guitarists started jamming together at the base's Army service club and eventually formed a band called The Torquays — named after an instrumental hit of the day by Raton, New Mexico's finest band, The Fireballs.

The Torquays were a fairly typical "beat band" of that period, performing a lot of covers by American rock and R & B groups. (A couple of their songs are on The Early Years — "There She Walks" and "Boys Are Boys," an early version of a tune that would appear in a radically different version on Black Monk Time.) They played mainly at Army dances and at Army-sponsored events to promote goodwill (in hospitals, old-folks' homes, etc.). Though nobody was getting rich, the Torquays gig was fun enough that even after they were discharged from the Army, they stuck around in Germany.

But then things started getting weird. The band changed its name. The guys got bizarre haircuts — shaving the top of their heads, leaving a monk-like fringe.

And, most important, they began seriously experimenting with their sound, writing songs based on primitive beats and minimalist lyrics. Clark's organ style alternated between medieval cathedral, roller rink, and the Tex-Mex-influenced style then in vogue with bands like The Sir Douglas Quintet and Question Mark & The Mysterians. Burger started fooling around with guitar feedback and fuzztone. And for reasons still unclear after four decades, Day traded his guitar for an electric banjo.

Some of the tunes sound like crazed polkas or travelogue music. "Hushie Pushie" from The Early Years sounds like a mutation of "Tiger Rag," except they sing "hushie pushie" instead of "hold that tiger."

This wasn't the Summer of Love for The Monks. Some of their song titles were punk-rock angry: "I Hate You" and "Shut Up."

More often, however, the lyrics were baby-talk simple. Sometimes, just nonsense chants: "Higgle-dy piggle-dy/Way down to heaven/Yeah!" or "Cuckoo, cuckoo/Who's got the cuckoo?/Now someone stole my cuckoo/And I wanna know who who."

And as strange and aggressive as the sound was, it somehow never sounded threatening, especially when Burger would introduce tunes like a brainumbling Down'? Well, come on Monks! Let's go!"

I, for one, do like "Love Tumbling Down." Instrumentally, the version on Black Monk Time is best, especially the crunching guitar effects Burger gets here. However, on The Early Years, the vocals sound more like a foreshadowing of the music of Ruben & The Jets. Plus, on that version you get the goofy intro.

Black Monk Time didn't do much on the European charts and didn't get released in the U.S. until the late '90s. The band recorded a couple of sides in 1967, the country-flavored but still loopy "Love Can Tame the Wild" and the gawdawful, fairy-fey generic folk-rock "He Went Down to the Sea." (Both are included in the reissue of Black Monk Time.) Shortly afterward, The Monks broke up, sparing the world any more crud like the latter song.

The Monks had a reunion in 1999 at New York's Cavestomp Festival. Since then, Day and Johnston have died. But as long as people keep discovering this timeless, primitive music, it'll always be Monk Time somewhere.
at April 03, 2009