First of all there's a new local music radio show, The Santa Fe Mix, which debuts Monday, May 25, 10 p.m. to midnight, from the new Milagro 139 restaurant in downtown Santa Fe. The performance will be broadcast the following week, June 1 on KBAC-FM 98.1, 10 p.m. to midnight, and will stream on the internet at HERE.

The show, hosted by David Schwartz and Clayton Cheek, will feature live acoustic performances combined with interviews, Santa Fe music calendar updates, along with Schwartz and what the press release says is "Cheek's insider views on the music scene, both locally and nationally." The show will center on singer-songwriters and soloists and feature several artists per show.

Schwartz was the founder and former editor-in-chief of Mix magazine, a music and audio technology trade magazine, while Cheek is a Nashville singer/songwriter and recording artist and a former classical music announcer for eleven years on PBS. (No, he's not the owner of Cheek's.)
Scheduled guests for the May 25th inaugural Santa Fe Mix show include Jono Manson, Sharon Gilchrist, Wiley Jim and Terry Diers. The first broadcast will be Monday, June 1 featuring Joe West, Jim Almand, Ramsey Scott and Jesus Bas.

The public is invited to attend the free live performances at 139 W. San Francisco St. Monday's at 10 pm. 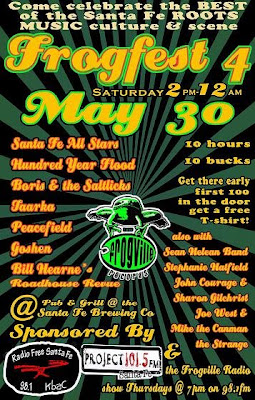 XXXXXXXXXXX
Secondly there's FrogFest 4, 2 p.m. to midnight on Saturday, May 30 at the Santa Fe Brewing Company. Admission is $10 and kids under 12 free.
Here's this year's line-up: