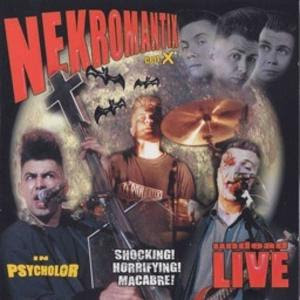 * Undead 'n' Live by Nekromantix. Horror-obsessed psychobilly from a band that started out in Denmark.

Granted the concept isn't that original -- and Roky Erikson does the spookhouse schtik far more convincingly that these guys.

But Nekromantix rocks. This nuclear-powered monster mash is irresistible.

Among my favorite songs on this live "greatest hits" collection are "Bloody Holiday," "Devil Smile" (which owes more to Black Sabbath than rockabilly) and the title song to one of their studio albums, "Demons Are a Girl's Best Friend."

*You Got My Mind Messed Up by James Carr. He never made it as big as Otis Redding, Wilson Pickett or even Percy Sledge.

But here's what Stax/Volt songwriter Dan Penn had to say about this amazing soulman: “Everybody keeps asking me what’s my favorite version of `Dark End of the Street.' As if there was any others but James Carr’s.” Penn should know. He co-wrote the song. (He makes this decalration when introducing the tune on the 2005 album Moments From This Theatre: Dan Penn and Spooner Oldham Live.)

Carr, who died of lung cancer in 2001, reminds me a lot of Redding -- and I don't throw around such compliments lightly.

This is an album of Carr's greatest hits -- or shoulda-been hits. "Dark End" is here and I pretty much have to agree with Dan Penn.

Carr's story is a tragic one. The cry in his voice was authentic. And when he sang "You Got My Mind Messed Up," he knew what he was singing about. Carr suffered from severe depression. According to the All Music Guide, " ... Carr found himself unable to deal with the stress of touring; he frequently wandered off alone and got lost. By 1968, his mental state had deteriorated greatly, making even recording sessions a challenge. "

This album is pure unadulterated Memphis soul that deserves a wider audience.

Consumer note: One of those weird e-Music blunders. The last two tracks have the song titles mixed up. "To Love Somebody" (yes, the old Bee Gee's hit) is labeled "Freedom Train" and vica versa. Come on, eMusic, there's way too much of this! * The Radio Tisdas Sessions by Tinariwen. I stumbled upon this, Tinariwen's first album, the night after I saw them play at The Santa Fe Brewing Company.

These guys are all Tuareg tribesmen from the country of Mali. They were nomadic folk forced into military service by Col. Muammar Gaddafi.

Crazy Mo didn't teach 'em how to play electric guitar though. This is trancy guitar rock with strong Saharan percussion provided via derbouka, a conga-like instrument. I don't understand the lyrics, but I understand they've gotten the group banned on the radio in Mali and Algeria, so they must be subversive.

This was the only Tinariwn album I didn't have. I actually prefer Aman Iman: Water Is Life (2007) and Amassakoul (2004). The good news is that eMusic has them too. And I've conveniently linked them for you. 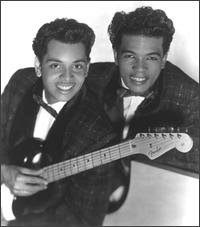 You'll also find original versions of early rock 'n' roll staples like "Farmer John" and "Big Boy Pete" (The Kingsmen later turned this into "The Jolly Green Giant") here, not to mention "I'm Leaving It All Up to You," a tune turned into a country pop hit a few years later by a duo called Dale & Grace.

Don Harris and Dewey Terry, both of whom came from Pasadena, recorded for Specialty Records in the late '50s. When you listen to these tracks you have to wonder why they never became stars in their own right.

Harris, however, didn't exactly fade into obscurity. By the end of the '60s, he adopted the nickname "Sugarcane" and was playing electric violin -- not on Desolation Row, but with Frank Zappa, John Mayall and others. Fans of Zappa's Weasels Ripped My Flesh will remember him wailing on "Directly From My Heart to You." 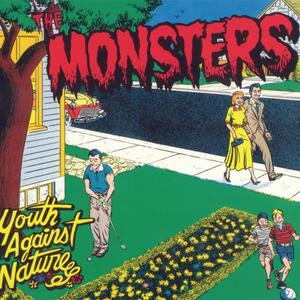 *Youth Against Nature by The Monsters. Tender little love songs your grandma would enjoy.

If your grandma is Ma Barker or Typhoid Mary.

This is rock 'n' roll the Beatman way -- wild, raw and trashy! If you don't know what I'm talking about, get thee to Voodoo Rhythm!

This album was recorded in 1997 at Toe Rag Studios in London (that's where Billy Childish has recorded his best stuff in recent years.)

Uncompromising as it is, this album is far more accessible to the only other Monsters album I have, Garage Punk Vol. 1. (For my review of that, CLICK HERE and scroll down.) 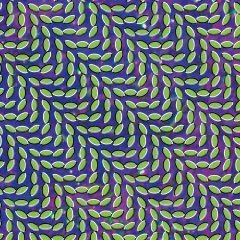 * The last seven songs on Merriweather Post Pavilion, the new album by Animal Collective. (I downloaded the first four at the end of last month.)

About the first thing that pops in to my head when listening to this music is "Brian Wilson Conquers the Martians."

This band and TV on the Radio are about the only distinctively 21st Century modern rock I'm listening to these days. Usually I hate synth-based music, but you can't deny how creative these boys are -- and how catchy and addictive their music is.

That being said, I think I prefer 2007's Strawberry Jam. Merriweather's growing on me though.

* Eight tracks from Como Amigos by Flaco Jimenez. Back about the time I graduated from college and moved back to Santa -- we're talking the fall of 1976 to be exact, I heard Ry Cooder's version of "He'll Have to Go," a Tex-Mex arrangement featuring an accordian player I'd never heard of previous -- Flaco Jimenez. I was astonished! I was so impressed that I didn't even want to get the Ry Cooder album until I sought out more music by Flaco.

A couple of days later, I was downtown and decided to check out the old Star Records, which then was located in La Fonda. Sure enough, they had a Flaco album on some tiny Texas label, so I bought it. Pure unadulterated Flaco. My favorite tune was one of ethnic pride, "Soy Chicano."

Who knows what happened to my copy of that album. But though I've heard Doug Sahm's version (which he just called "Chicano"), I hadn't heard that original Flaco version in years -- until last Monday night.

Bob Hastings was on B.C. Caldwell's Blue Monday show on KSFR. When two record collectors that serious get together, you know something amazing is going to happen. Bob was playing some of his great old family '78s -- mariachi music, Mexican, Tex-Mex. And sure enough, he played that original Flaco version of "Soy Chicano." Man, it sounded great.

A strange voice led me to eMusic, where I found the song on this album. So I used my last remaining to download that plus seven others. All primal Flaco. No guest rock stars. No English lyrics. No covers of popular American songs. Just that cosmic accordion.
at May 07, 2009

Today is the birthday of a famous accordion player named Yankovic.  No, I'm not talking about Weird Al. I'm talking about...