HAVE I TOLD YOU LATELY HOW MUCH I HATE THE MUSIC INDUSTRY? 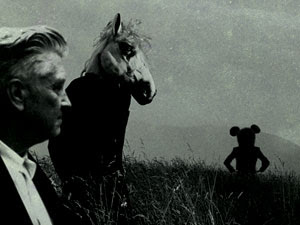 Here's one that got me pig-bitin' mad this evening.
Sparklehouse and Danger Mouse have colaborated on a new album called Dark Night of the Soul. It's got guest vocals by all sorts of folks including Iggy Pop, Frank Black, Vic Chessnutt and -- I'm not kidding -- David Lynch. Lynch also produced several strange photographs for the project (including the one here I nabbed from the NPR site.)
But, according to NPR, don't expect to see Dark Night of the Soul on record store shelves, or on iTunes or Amazon anytime soon.

An unnamed spokesperson for Danger Mouse says that "due to an ongoing dispute with EMI" the book of photographs will "now come with a blank, recordable CD-R. All copies will be clearly labeled: 'For legal reasons, enclosed CD-R contains no music. Use it as you will.'" While offering no specifics, EMI has acknowledged the legal dispute with Danger Mouse and released a statement saying, "Danger Mouse is a brilliant, talented artist for whom we have enormous respect. We continue to make every effort to resolve this situation and we are talking to Brian Burton (Danger Mouse) directly. Meanwhile, we need to reserve our rights."

I think EMI needs to reserve its last rites.
Like one of the commenters on the NPR site wrote, "Would they rather I download it for free illegally from a bit torrent client...instead of having my money from iTunes..."
Indeed. And record company suits wonder why their stupid industry is in the toilet. There's lots of fans who gladly would pay for this music.
Anyway, you can listen to the entire album -- or any track you want -- streaming on the NPR site.
And if you look hard enough on the web, (I haven't yet) I'm sure you can find illegal downloads of the album.