OPENING THEME: Buckaroo by Buck Owens & The Buckaroos
The Golden Triangle by The Austin Lounge Lizards
Two Six Packs Away by Dave Duddley
Rebel Thunder by Kris Hollis Key
I Think Hank Woulda Done it This Way by The Blue Chieftains
California's Burning by Dave Alvin & The Guilty Women
Rockin' Chair on the Moon by Little Mo & The Monicats
Don't Tempt Me by Todd Snider with Loretta Lynn
I'm Talkin' About You by Bob Wills & His Texas Playboys 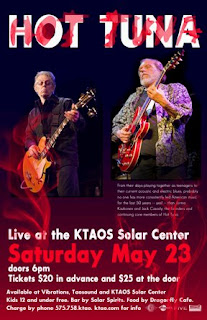 What Can You Do To Me Now by Willie Nelson
Take These Chains From My Heart by John Doe & The Sadies
Walkin' My Baby Back Home by Dan Hicks with Maryanne Price
Viper of Melody by Wayne Hancock
King of the Blues by Robbie Fulks
Big in Vegas by Buck Owens
I'm So Proud by Dan Penn
CLOSING THEME: Comin' Down by The Meat Puppets

Steve Terrell is proud to report to the monthly Freeform American Roots Radio list
at May 22, 2009