A version of this was published in The Santa Fe New Mexican
May 6, 2009 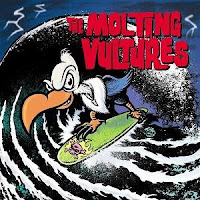 With apologies to Edgard Varèse (and Ruben Sano), "The modern-day garage snot rocker refuses to die." Not only that, they're all over the world.

I just got this bitchen little CD, Drop In and Go from sweet Adelaide, Australia, by an Aussie band I'd never heard of called The Molting Vultures. I had a feeling I was going to like it when I first saw the cartoon vulture surfing on the cover.

And I was right. The music of the Vultures is a modern-day extension of the basic Question Mark and the Mysterians/Blues Magoos sound, which hardly ever gets old. Lot of great Farfisa organ (or at least it sounds like the good old Farfisa) and fuzztone guitar.

Plus, the band has a singer, Phillip Vulture, whose only instrument is the theremin, giving some nice science-fiction effects on songs like "Gulls Rock," "Mummy Shakes," and "Bad Bad Woman." All the musicians have the surname "Vulture." Besides Phillip, there are Nick, Mick, Jamie, and Michael "Popeye" Vulture. Their mom, Mrs. Vulture, must be very proud.

While the band rarely strays from the basic hopped-up garage sound, there are some unusual touches. For instance, the song "It's What I Wanted" features some pounding piano that sounds straight out of "Crocodile Rock." This boogie sound returns on the album closer, "Tear It Apart," which also features a childlike harmonica solo by Popeye.

One of my favorites here is the roughly six-minute "Insane Jane," in which the band gets slow and psychedelic, with Jamie Vulture playing the organ nice and spooky and the guitars growling, reminding me a little bit of The Black Angels' sound.

Yes, this kind of music has been done a zillion times before, and The Molting Vultures don't score a lot of points in the originality category.

Still, this is the sound I've loved since the days of "Dirty Water" and "Liar Liar." May these down-under Vultures ever molt. 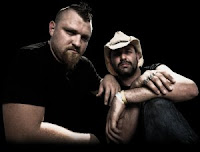 * Used by Black Smokers. Another sound that refuses to die is that of the crazed guitar-and-drums blues/punk duo. Think Flat Duo Jets, The Black Keys, and The Moaners — and The White Stripes in their early days.

And now, from the great nation of Italy — via Chicago's Pravda Records, one of my favorite little labels — comes Black Smokers, which consists of singer/guitarist/theremin (that again!) player Marcello Milanese and Ivano Zanotti on drums.

The Smokers do lots of high-charged, crunching rockers — as bands of this sort are prone to do. "Kickboxer Girl" is an oughta-be classic. The instrumental "Raccoon City Limits" packs a solid punch in less than two minutes, as does "Notturno Op. 69," in which Milanese makes his slide guitar wail. "Cheap Woman" sounds like the music of a punkier ZZ Top, and "Toc Toc" suggests a stripped-down quasi-rockabilly style.

The thing is, the Smokers aren't afraid to tackle the slower and dare I say pretty ballads as well, such as the dark minor-key "Foggy Days" and the meandering "Rain on the Ocean." Milanese has a gruff, soulful voice that lends itself to these songs as well as to the crunching rockers. And speaking of the Flat Duo Jets, I bet Dex Romweber would dig the tango-soaked blues of the title song on this record.

Gee, it seems like only yesterday — actually it was just a week ago — that I wrote "the free world probably didn't need another version of 'Folsom Prison Blues.'" Nobody listens to me. Here's another one, a 90 mph slide-guitar version. I gotta admit, I kinda like it.

* Happier Than You by Jesus H. Christ and The Four Hornsmen of the Apocalypse. This is a poppy little New York group with, yes, four hornsmen (trumpet, sax, and two trombones) and an amazing singer, Risa Mickenberg, who has a sexy, nasally voice and a nicely skewed outlook on love, life, and people we all know.

The album starts out with a song about a character that office workers around the world will recognize: "Liz, the Hot Receptionist." ("She never got promoted/Always wondered why/Her desk was by the printer: easy to stop by.")

Mickenberg sings about the type of relationship that rarely makes it to song in "Back Burner Guy." It's about a man she wants around to "talk about music, talk about art" and have in case her real relationship falls through. "As long as I know you lust after me/I can be the girl he wants me to be," she happily chirps.